How to design a green city 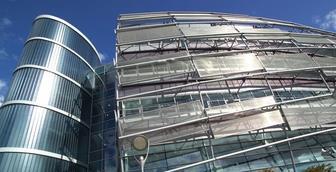 Much of the global effort to improve sustainability has been directed at individual building projects. Many are pushing the boundaries of best practice and giving engineers valuable experience of turning sustainability theory into living, practical designs.

We need to be aware of the bigger picture, however, and the fact that most buildings are interconnected in various ways to create towns and cities. These interconnections include the need to transport people to and from the buildings, sharing of utilities and the direct impacts structures have on each other through shading and air currents.

To create truly sustainable conurbations, we must, then, take a holistic view that includes attention to detail for each individual building but also takes account of the myriad other factors that make up a city. We need, for instance, to consider the juxtapositioning of commercial and residential areas, how they are linked by the transport infrastructure and how they integrate with green spaces. With the right approach, travel between home and work can be minimised so that people establish a better work-life balance, use of public transport is maximised and CO2 emissions from transport are greatly reduced. In this way we can address the true philosophy of sustainability by influencing the health and wellbeing of people as well as simply making buildings more efficient.

Also, at the same time as taking steps to mitigate the effects of climate change, we have to adapt to the changing environmental conditions that impinge on our designs. For many engineers this requires a change of mindset, moving away from historical precedents and embracing innovative techniques that reflect sensible environmental predictions.

Just how we go about this depends largely on location – or, at least, it should – not just in terms of the country or region we are building in but also taking account of microclimates created by prevailing winds, availability of solar and tidal energy and proximity of buildings.

Unfortunately, there have been many occasions where the influence of location has been superseded by clients’ aspirations. A highly glazed facade on an aluminium frame within a steel structure may look impressive and be ideal for maximising solar gains in cool climates, but it is inappropriate for hot regions and increases the demand for mechanical cooling.

Clearly, it’s easier to turn the concept of sustainable cities into reality when starting from scratch. In most cases, however, we are dealing with cities that already exist and a legacy of designs produced to address very different criteria to those of today.

Well-established towns and cities are in their locations for good reasons. In planning a new city, we need to heed the factors that influenced our forebears, rather than just putting them where the space is available

That said, there is still a great deal that can be done, project by project, within an existing city that will eventually integrate “islands of sustainability” to create a more sustainable whole. One obvious example is the inclusion of combined cooling, heating and power plant in one project that can be connected to adjacent buildings/complexes as they in turn are developed. This approach also has the advantage of exploiting economies of scale.

Most well-established towns and cities are in their particular locations for good and sensible reasons. Often, for example, they are close to rivers or coasts because such areas are able to sustain large populations. When planning a new city, therefore, we need to take account of the factors that influenced our forebears, rather than locating them in an inappropriate region simply because that’s where the space is available. Extensive energy use is often needed to mitigate the effects of a poor location, taking us further from the goal of sustainability.

This illustrates another important point: the fact that services are often installed to compensate for the inadequacies of the building envelope. The internal temperature of a poorly insulated building will be strongly influenced by external temperatures. A well-insulated building, on the other hand, requires much less input from energy-hungry services to maintain a comfortable environment. Getting the building envelope right is the key to minimising energy consumption – before we rush headlong into deploying all sorts of clever technologies in the building services.

This doesn’t mean that we should not be clever about how we deploy those technologies; simply that we need to do everything we can to minimise their use. In fact, climate change and trends in building usage will present us with increasingly rigorous challenges.

A case in point is the increasing population densities in commercial workspaces, putting more people and computers into smaller spaces. The internal heat gain often eliminates the theoretical need for space heating, even in cold climates. Of course, it may also increase cooling demand in hot weather so, as engineers, we have to find innovative ways of delivering cooling. If the external temperature is lower than the indoor temperature, free cooling is the obvious answer. If that is not the case, we ought to be looking at how we use the solar energy to drive the mechanical cooling, perhaps with photovoltaics driving DC high-efficiency chillers. In this way a balanced system is created where most energy is generated at the time of maximum cooling demands. A similar balanced approach can be applied using solar thermal panels to generate hot water and, perhaps, drive an absorption chiller for cooling.

If we are to create more sustainable cities, we need to make them as close to carbon-neutral as possible, and this brings us back to the influences of legacy and location. For example, it’s much easier to create a low-carbon city in a country where a large proportion of power is generated from nuclear reactors, compared with a fossil-fuel-based energy infrastructure.

Taking this argument to its logical conclusion, it would make sense to build a city around a large nuclear reactor generating power and heat

Location also has a big influence on the technologies that can be deployed. There would be little point in investing in extensive rainwater harvesting systems in the Sahara, nor installing large arrays of solar panels at the North Pole. While these are somewhat nonsensical examples, planners, architects and engineers have done nonsensical things in the past.

Nevertheless, renewable energy technologies will certainly form the bedrock of many sustainable city designs. Again, location will influence just which renewables are most appropriate. It has been calculated that a solar panel in the Sahara measuring more than 325,000km2 could meet all of the world’s energy demands. As this would cover only a small part of the desert’s area, it may seem feasible, but distributing the energy and storing capacity to meet peaks would be an enormous challenge in both engineering and political terms.

On a more local level, though, there are often advantages to centralising power and heat generation in an optimum location and then distributing it where needed. As a rule of thumb, the larger the plant, the more energy efficient it is, as long it is controlled effectively.

Earlier I mentioned the use of CCHP plants serving district cooling, heating and power schemes, but we also need to consider the fuel required to drive the plant. Fossil fuels would clearly be inappropriate in a sustainable city so biomass may be the preferred option. However, such a large plant would require frequent fuel deliveries and massive storage capacity, so it would not make sense to locate the plant in the centre of a city. Instead, it should be outside the city with chilled and hot water distributed via a super-insulated pipe network.

Similarly, most conurbations have low wind profiles so there is little to be gained from installing wind turbines. Building a large wind turbine plant in a windy location and transporting in the power would give a lower cost per kWh despite the distribution losses.

Taking this argument to its logical conclusion, it would make sense to build a city around a large nuclear reactor generating power and heat. But while this idea may stand up to engineering scrutiny, it is unlikely to be politically acceptable – another local influence that has to be considered.

The diversity of local factors makes it difficult to prescribe an “off the shelf” sustainability solution. However, a plan that takes location into account, looks at how buildings are interconnected, and puts emphasis on minimising heating, cooling and electrical loads in buildings will drive the project in the right direction.

Ant Wilson is a business unit director at Faber Maunsell