Richard Saxon, chair of the Joint Contracts Tribunal, speaks to Building legal columnist Francis Ho about new kinds of contracts, the competition, and where he thinks the industry is heading 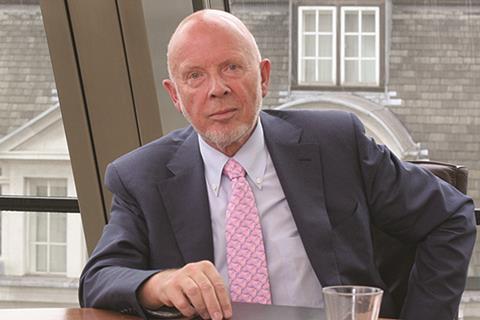 The Joint Contracts Tribunal (JCT) is the UK’s leading provider of standard form construction contracts. As it launches its 2016 editions, we sat down with its chair, Richard Saxon, to discuss some of the big issues facing the organisation and the wider construction industry. Here’s what he had to say …

On his role and objectives …

I chair the meetings of the JCT council and board. I also act as an ambassador for JCT generally. The council represents the construction industry and proposes and approves any changes to the contracts. Those contracts are the fundamental engine of what we do.

The board comprises the seven member bodies of JCT and deals with the business issues as distinct from the matter of the contracts themselves. I convene and chair those meetings and try to move the agenda forward.

Necessarily, they also expect me to help shape that agenda. This “thought leadership” aspect is the interesting bit. Inevitably, the first thing that comes to mind with a body like JCT that has a long-established history, is that it helps if there is somebody who can stand back and say: “Why don’t we do something different?” That’s me.

JCT welcomes competition from other contract writers because it creates a flow of ideas. It’s evidence that some people want different things to what we’ve been doing and we do respond to that sort of evidence of the needs of the industry in creating changes in our own forms of contract or additions to it.

[We] don’t accept the NBS [National Construction Contracts and Law Survey 2015’s] idea that we’re fading away. We have a much larger sample because we have registered customers. Increasingly, we know who our customers are because they buy through our online store. We know that sales are buoyant and, in fact, increasing. We think quite a lot of former users of other forms of contract are returning or changing to JCT.

So, we’re not concerned about the competitive situation. I think it’s likely, however, that we will continue to focus on building-related contracts.

JCT is a mixture of adventurous people and conservatives. I hope I’m tilting it more towards the adventurous people. The very first recognition of BIM by any standard form contract authoring body was actually done by JCT in 2011, which was just after the government policy was published. We produced a public sector supplement which incorporated recognition of [BIM].

Level 3 isn’t fully defined yet but we want to have a Level 3 product available by the time Level 3 is actually ready to use. We’re looking at what other people are thinking. For example, there’s a debate about whether Level 3 has to be a multi-party product or whether it can be a conventional two-party product.

On the possibility of new contract forms …

One element which has come up early with Level 3 BIM is the idea of a facilities management contract. It’s fairly obvious that Level 2 introduced [whole life performance] as an area which most clients had previously ignored. The question is whether a project is successful in the long-term, as distinct from merely being successful on the handover date as being completed on time and budget, to specification, and so on.

But does the facility actually do the job? Does it cost too much to run? Does it help the occupiers to perform their jobs? The whole arrival of “soft landings” and the toolkit that goes with BIM enables you to ask those questions now. Facilities management, which governs how well the building operates, is in a “Wild West” state in contract terms, in comparison to building contracts, which have evolved and become quite civilised.

Obviously, the loudest voices come from JCT’s members, which include clients. In practice, the voice of the client is heard by all the branches of the industry. Consultants listen to clients. The Local Government Association represents all sorts of public sector clients. Contractors and subcontractors also have an understanding of what clients want.

This year we launched the JCT Network which is a way for people to register that they want to have a two-way conversation with JCT. These users want to know more about what goes on and provide feedback. That is just starting and I think it’s going to be very useful. We do get submissions from people all the time who would like to influence what comes next. The main source of feedback remains the colleges [that make up JCT and represent the industry].

They look at their own drafting and see whether it’s working and come back with comments that say we need to say this in the next one or review some of our provisions. We’re always reviewing. Some changes are driven by outside forces like legislation, case law or other moves in the market that suggest that something needs to be changed.

On his potential legacy at JCT …

[What] specifically interests me is to help steer JCT into the digital era of construction, not just the digital era of communicating contracts. The BIM Working Group is a particular interest of mine. The more I look at digital built environment the more I realise that the whole life issue is a new and very important territory. It costs more than building the building in the first place. It’s actually the best way of deciding whether you have built the right building. I think it’s going to be very interesting indeed.