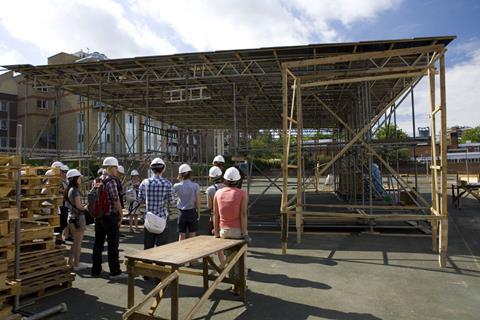 The Jellyfish theatre, currently under construction at Bankside on London’s South Bank, is junk architecture.

And that’s because it’s made entirely out of junk. Materials that are deemed useless and thrown out. Board offcuts, dismantled poles and battens, rickety tables, freight palettes, old theatre sets, empty plastic water-cooler bottles….

Folke Köbberling and Martin Kaltwasser have turned junk construction into an installation art form with an overt sustainable message.

The project formed part of the London Festival of Architecture. But it has outlasted the three weeks of festival, which ended on 4th July. In fact, construction isn’t due for completion until 26 August. And then it will function as a true 100-seat theatre for three weeks.

The idea was dreamed up by the alternative theatre company, Red Room, whose artistic director, Topher Campbell, says: “We wanted to make something sustainable and makeshift.” To find the real pros, Red Room went as far as Berlin, where Folke Köbberling and Martin Kaltwasser have turned junk construction into an installation art form with an overt sustainable message.

“This project reverses the normal processes of our economy,” says Kaltwasser. “Here we are turning waste into functional products. We take something worthless and make something of worth out of it.”

Construction at Bankside began with a three week collection of discarded materials from companies all round London. Red Room was able to tap fellow theatre companies for discarded sets, and the site is now stockpiled with a plywood outline of the London Eye and fence poles with their feet enigmatically embedded in cubes of rough concrete.

The giant fruit and veg wholesale market, New Covent Garden, turns out to be the biggest donor, and has supplied enough wooden palettes to create a small hillock on the site.

Kaltwasser dismisses the result of their labours as “bad scaffolding”.

Construction is a suitably DIY affair undertaken by up to six local volunteers stage managed by Kaltwasser and his assistant Robin Turner.
So far, though, the building that is emerging on site shows little of the alternative, recycled, DIY approach of its creators. On my visit last Friday, it was little more than a bare rectangular shed of mainstream steel scaffolding poles.

Kaltwasser is none too happy with this. Nor with the reaction this sustainable project has received from British authorities and mainstream building industry.
Since the building is intended to accommodate an audience of 100 people during performances, the building control officers at Southwark Council demanded it meet conventional building regulations.

So structural engineers Adams Kara Taylor specified the structural frame of scaffolding poles, and Kaltwasser intends to conceal this behind linings of recycled materials. And that’s where the empty water-cooler bottles come in. They will be arranged along one wall in the milky, translucent shape of a jellyfish.

The erection of the scaffolding likewise fell outside the intended DIY process and was let to a mainstream contractor. Indicating that there was a falling out during the contract, Kaltwasser dismisses the result of their labours as “bad scaffolding”.

As for all the huge building contractors still active in the area, they have behaved “a bit like black boxes,” says Kaltwasser

Obtaining temporary planning approval from Southwark was no less problematic. “We’ve only been given provisional planning approval,” he says. “They are waiting to see how it looks when completed”.

As for all the huge building contractors still active in the area, they have behaved “a bit like black boxes,” says Kaltwasser. Far from being eager to offload all their spare off-cuts on to a good local cause, they have demanded written proof of how the waste will be disposed of.

A reaction doubtless instigated by enlightened waste management regulations. And a case of the good being the enemy of the best.

Even so, Kaltwasser has furtively reverted to being a conventional paying customer at timber merchants Travers Perkins outlet just one block from the site. “We have to buy fixing materials like screws and nails,” he admits.