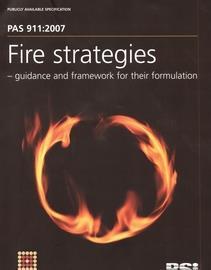 PAS 911 sets the framework for a fire strategy. The author, Paul Bryant, explains his thinking

Given this confusion, I felt it was necessary to have a standardised framework, whereby fire strategies prepared by different companies could be compared in terms of content and the level of work put into their preparation. PAS 911, a Publicly Available Specification jointly prepared by the British Standards Institution and Kingfell, was drafted to set the benchmark.

The work began in late 2006 but some of the concepts date back to ideas I had in the mid-1990s. Consequently, it could be said that PAS 911 has been more than a decade in the making.

The specification follows a logical path from consideration of the key inputs to the delivery of the final strategy, encompassing a series of sub-strategies. The seven key inputs are:

Management and system audit – assessment of current procedures and systems for existing buildings and those planned for new and concept buildings. Such information can give a realistic insight into what may or may not work.

Mandatory framework – consideration of the relevant legislation and special requirements of bodies such as insurers.

Objectives setting – consideration of what may be important requirements, including life safety, building, business and environmental factors.

Risk and hazard assessment – a requirement of current legislation, but other factors associated with hazards are included.

Occupant characteristics – the types of people using the building and their needs.

Practical issues – consideration of the limitations and constraints in preparing the strategy.

It is the last item that perhaps should be more widely understood and accepted. A strict fire strategy that may make sense from a legal and regulatory point of view may prove unworkable. A degree of pragmatism for those involved in preparing the strategy is seen as essential. Part of this is the delivery of an “overprotected” building whereby more fire protection systems and processes are incorporated than is necessary.

A term introduced in the document is “design basis”. Fire precautions and designs normally follow one of two paths; a prescriptive approach whereby rules and standards with quantified requirements are applied, or a performance approach using a process allowing deviations and alternative ideas. The latter is often referred to as a fire safety engineered solution. The PAS also recognises that there may be an intermediate design basis, using both a prescriptive and performance-based approach. This is referred to as a hybrid design. Guidance on the issues surrounding the alternative approaches is given in the document.

What is quite new in the PAS, and in the fire standards world in particular, is the use of diagrams or analytical tools. A number of diagrams are introduced to provide those preparing a fire strategy with a method of trying to picture the problem. This idea came to me while studying for an MBA in the early 1990s. If those working on a business strategy could use diagrams for development of the strategy, why not come up with a similar idea for the development of fire strategies? The use of such tools also forces a holistic approach to strategy preparation and allows all those involved to see the bigger picture. This is the level where a fire strategy should be; not just bogged down in detail. Similarly, the strategy should not be so vague as to mean anything to anybody.

The PAS also lists a number of fire strategy outputs:

Those reviewing the PAS may be surprised initially that the outputs section is simply a series of lists of items to be considered, with the tick boxes “Included” or “Not applicable”. It should quickly be realised that this is all that is necessary as requirements for individual systems and procedures are amply covered in British and European Standards. It also forces those who prepare the strategy to consider whether individual items have or have not been included.

The first draft was considered in the spring by a steering group from across the industry. Via an accelerated programme, managed by BSI, the document is now available. The fire industry tends to be conservative in accepting new ideas. I was, however, pleasantly surprised by the support received. New philosophies are the driver for any industry and PAS 911 is intended to follow that ideal.

Paul Bryant is founder and chief executive of Kingfell, www.kingfell.com

PAS 911 is available from British Standards Institution at £99 + VAT