Kitchen design for the over 65s: Older and wiser 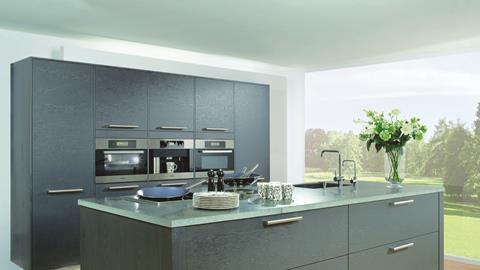 The number of over 65-year-olds is growing fast and kitchen designers are having to adapt fittings to meet their particular needs. Building looks at the ingredients of ‘inclusive design’

The dominant theme at this year’s KBB show in Birmingham will be the kitchen and bathroom industry’s response to the UK’s ageing population. Today, for the first time in history, Britain’s over-65s now outnumber people under the age of 16, and the real growth market for business from now onwards is the 50-somethings.

What is wrong with traditional kitchen design? The dominant UK model for kitchens is the two door, one shelf kitchen cabinet. These have the advantage of being economical to make and easy to transport as flatpack unassembled units. But this model isn’t particularly user friendly, particularly for older people. Getting a pan out from the back of an under counter unit means bending very low and stretching forward to get the pan out. It probably also involves getting all the pans at the front of the cupboard out to access those at the back. 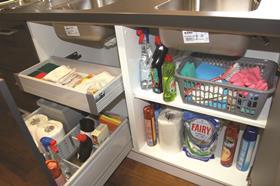 There is a better way of organising a kitchen. If full width drawers on full extension runners that allow the whole drawer to be pulled out of the cupboard are used in place of a doors-and-drawers unit, access to the cabinets contents is much easier. All the user has to do is pull the drawer out. The main downside of this system is that the added complexity of drawer and runners carries a price premium.

These changes to kitchen design have been driven by new fittings, and the pioneer in this market is fittings manufacturer Julius Blum. Blum’s core product development has centred on ergonomics, ease of access and perfecting motion. In an effort to understand the difficulties that older kitchen users may experience, Blum developed a special suit called the Age Explorer which simulates typical physical limitations.

The Age Explorer uses weights, goggles and ear defenders to restrict muscle use, eyesight and hearing. Special gloves simulate arthritic conditions in fingers and joints and internal weights limit normal muscular use like stretching, bending, reaching and pulling. Bindings limit the motions of elbows and knees and special topstitches in the suit make it difficult to straighten the arms. Using the suit as a research tool Blum has realised the benefits to users of full-extension drawers and pull-outs. It also recognised the usefulness of special corner units based on drawers instead of the conventional carousel as it increases storage capacity and makes it easier to locate smaller kitchen items.

The market dominance in the UK of basic specification cabinets that are designed to be transported unassembled from the manufacturer to the retail outlet has held back greater use of a drawer-based cabinet design. This is not the case on the continent where unassembled kitchens are only a small part of the market.

The widespread adoption of drawer-based kitchen cabinets from Continental companies is changing the outer appearance of modern kitchens which now have a more linear design, often featuring hidden handle grooves the full length of the drawer’s leading edge. This not only looks smart and uncluttered, it makes it easier for slightly arthritic fingers to grasp. Further help is at hand as you move up the price point in the shape of servo-drive systems that allow the automatic opening of base unit drawers by pressure on the drawer front or just the slightest of pulls on the handle, while soft close drawer systems make the closing of wide drawers easy with just a gentle push.

Ten million people in the UK are over 65 years old. The latest projections are for 5.5 million more elderly people in 20 years’ time. This sort of shift in the population will inevitably change the design of kitchens and how they are used by a large percentage of consumers. The change in kitchen cabinet design from door-based to drawer-based has already started and is certain to pick up speed over the next five years.

KBB is being held at the NEC, Birmingham, 7-9 March. For more details and to pre-register free go to: www.kbb.co.uk