The past quarter has again shown little movement, with lead times static for all but two packages. However, growing uncertainty over Brexit means this steadiness could soon change.

Facade cleaning equipment ▶ lead times remain at 33 weeks; contractors continue to be busier with more enquiries than six months ago but do not anticipate any change in lead times over the next six months.

Lead times for brickwork ▶ stay at 11 weeks and  for blockwork ▶ at seven weeks; companies do not predict any increase. Drylining ▶ lead times remain at 13 weeks following a small increase in the previous period. No change is reported for the next six months.

Only two packages are fluctuating this quarter, with rises for the third quarter in succession for non-standard passenger lifts due to continuing pressure on design and manufacturing resources. The impact of Brexit on labour and imported materials remains a concern across several packages. Rotary piling lead time has reduced by a week, but the market is predicting this will level off going forward. Across most packages workload and enquiry levels remain at a consistent level.

For more details on the article and the contributors please visit www.macegroup.com/people/suppliers. 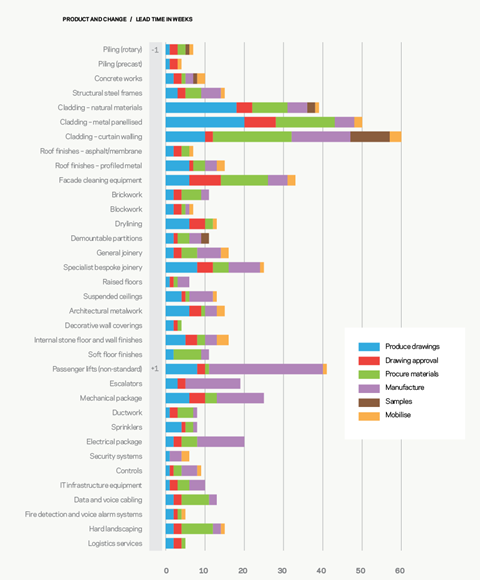