A tale of two mayors

With Londoners headed to the polls on 5 May to decide the city’s next mayor, we look at the impact frontrunners Zac Goldsmith and Sadiq Khan would have on the major construction issues facing the capital 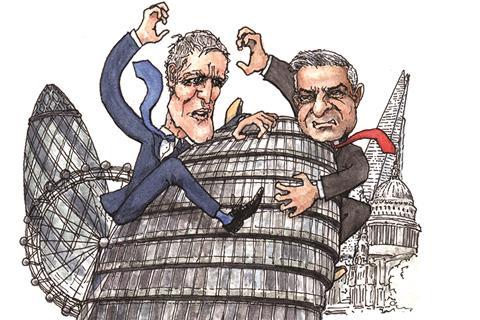 This time next month, London will have a new mayor. May’s election will bring down the curtain on 16 years of the Ken ‘n’ Boris show that has dominated the capital’s politics since the elected mayoralty was established
in 2000.

Neither of the two leading candidates, Labour’s Sadiq Khan and the Conservatives’ Zac Goldsmith, measures up to the first two incumbents of City Hall in terms of being a larger-than-life personality. But the construction industry may settle for a little less showbiz if delivery improves.

The new mayor faces profound challenges. London’s population passed its previous peak of 8.6 million last year. And the Office for National Statistics predicts that it will continue growing to more than 10 million by 2030, before soaring to 11 million in another decade.

Growth on this scale will load ever more strain on London’s already creaking housing and infrastructure. So how do Sadiq and Zac measure up on the issues that count to the construction industry?

Housing is the overriding issue for both mayoral candidates with Khan explicitly identifying it as his “single biggest priority”.

Both Goldsmith and Khan pledge to increase total housing supply to the figure of 50,000 new units a year that experts reckon is needed to keep pace with population growth and remedy supply backlogs.

However, they differ on how this ambitious goal will be delivered. The big dividing line between the candidates is Khan’s pledge that half of all new homes developed in London for sale or rent should be “genuinely affordable”, reinstating the target set by Livingstone.

His manifesto says Khan would set out “clear guidelines” for how he would use his “call in” planning powers to take charge of developments that have stalled or include inadequate affordable housing. And he would back councils that want to maximise affordable housing in new developments, adding that he wants to see greater transparency around viability assessments than currently exists. He also proposes a new category of tenure described as Living Rent, set at one-third of average local wages.

To deliver his housing pledge, Khan promises to establish Homes for Londoners, a “new and powerful team at the heart of City Hall” that will pull together all of the mayor’s housing, planning, funding, and land powers and expertise.

Goldsmith rejects Khan’s 50% target, arguing that developers will build high-rise luxury flats to pay the cost of providing the affordable housing. Rather than deploying the stick of an affordable homes target, Goldsmith prefers the carrot of a league table, effectively naming and shaming those developers that have not furnished sufficient affordable housing.

Both candidates pledge to continue Johnson’s drive to build more housing on spare and under-used public land. Goldsmith promises development plans in place for all of the surplus sites that belong to Transport for London, which he says has landholdings equating in size to the borough of Camden, by the end of his first term.

In addition, both Goldsmith and Khan are competing to offer Londoners access to the new homes that will come forward on these sites.

Khan pledges that any shared ownership and for-sale homes built on land released by the public sector will be offered initially to Londoners who have been renting privately for at least five years. Goldsmith proposes that this period should be just three years for homes built on Transport for London sites. Goldsmith also counters Khan’s pitch to “Generation Rent” by proposing an amendment to the London Plan so that more homes will be set aside for Londoners on average salaries. 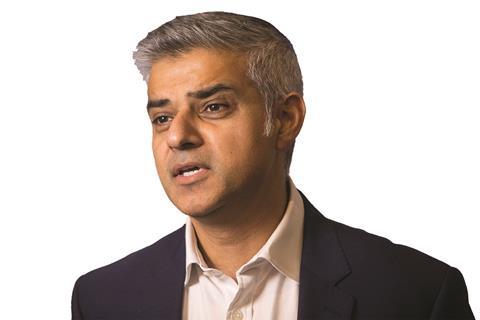 Goldsmith also pledges to develop a “mayor’s mortgage” for first-time buyers. In order to give Londoners an opportunity to buy off-plan flats, these would incorporate an offer period lasting for at least nine months rather than the now standard six. He also gives a nod to the fledgling build-to-rent sector by saying that the London Plan should make it clear that such schemes will be considered favourably by planners.

Both candidates are anxious to stress that council estate regeneration projects will only happen if they win the backing of existing residents. Goldsmith’s manifesto specifies that residents should be guaranteed an equivalent-sized property to the one they have moved out of, without paying any extra rent.

Both candidates are keen to stop developers hoarding land without building on it, while Goldsmith would give smaller developers first right of refusal for smaller public sector sites.

In addition, the Tory manifesto proposes the creation of a new small developers panel that would help such companies cut through the time-consuming and expensive procurement hoops that put off such companies from bidding for public land.

Adam Challis, head of UK residential research at JLL, argues that Khan’s 50% affordable housing target is largely a rhetorical flourish, recalling that it was never achieved under Livingstone.

But he also voices reservations about the proposal. “Fifty per cent affordable housing would immediately stop a huge swath of development activity,” he says.

Sarah McMonagle, head of external affairs at the Federation of Master Builders, expresses concerns that imposition of a 50% target would have a disproportionate impact on the viability of small sites that SME housebuilders rely on.

However, Ben Derbyshire, managing partner at HTA Design and RIBA presidential candidate, believes that neither of the manifestos rises to the scale of London’s housing challenges.

“Their various declarations about the importance of local influence and aesthetic context and so on merely reinforce the sense that those who are already housed are in some way entitled to use the planning system to deny the same opportunity for this to those who are not,” he says.

As well as increasing the density of outer London’s suburbs, he believes the new mayor will have to address really thorny issues, such as bringing forward garden suburb extensions in the green belt and scrapping the existing network of St Paul’s Cathedral viewing corridors in order to allow new clusters of high-rise buildings.

Goldsmith’s manifesto features an eye-catching proposal to appoint a new chief architect who will police the quality of design on schemes coming forward on public sector sites.

He also pledges to run a competition for new designs to bring the traditional Edwardian mansion block up to date. And Goldsmith says his team of so-called “flying planners” will work with local communities to ensure that schemes better mirror the character of the surrounding areas, reflecting a generally bearish approach to high-rise development. Khan’s manifesto also picks up on concerns about towers with a pledge to ensure new tall buildings respect the character of existing neighbourhoods with beefed-up policies in the London Plan.

Commenting on Goldsmith’s chief architect plan, JLL’s Challis says: “With the greatest respect, that will amount to nothing and will not solve any of the key issues. But it’s something that people can understand.” 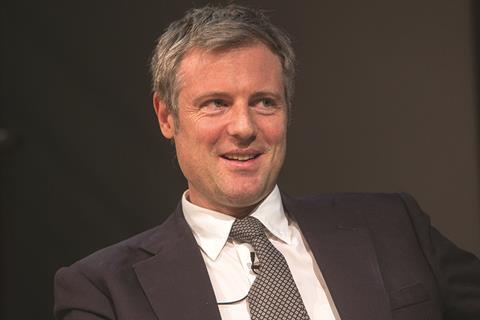 Reflecting his background as an environmental campaigner, Goldsmith’s green manifesto is a lot more fleshed out than Khan’s.

He says solar panels, roof gardens, or green roofs should be factored into all new development. On the large schemes coming forward on public-owned sites, solar panels will be a default feature, according to Goldsmith’s manifesto.

These measures underpin Goldsmith’s commitment that the proportion of London’s energy produced from the sun should increase tenfold from its current level of 1% by 2025. He also pledges to maintain the London Plan’s commitment to zero-carbon homes.

Khan meanwhile says he wants investment to make older homes more energy efficient as part of his proposed “100% London” campaign to switch the capital across to clean energy.

Both candidates pledge to protect the green belt with Goldsmith promising to do so by amending the London Plan.

Goldsmith’s pledged team of “flying planners” will be deployed to speed up progress on sites where progress has stalled. This move is designed to speed up the delivery of applications, where the performance of the capital’s local planning authorities lags behind those of Bristol and Manchester, according to recently published research by the consultancy GL Hearn.

Goldsmith proposes a league table, naming and shaming those developers that have not furnished sufficient affordable housing

Goldsmith’s manifesto promises to create a traffic light monitoring system on the Greater London Authority’s website to track the progress of key sites. And if progress on these schemes continues to stall, Goldsmith promises to establish further mayoral development corporations, like that already set up to drive through the Old Oak development.

To facilitate his drive to prioritise development on brownfield sites, Khan pledges new design benchmarks to increase densities around the capital’s town centres.

Neither Goldsmith nor Khan will be on the Heathrow Christmas card list with both pledging to oppose the third runway at the airport. Khan, though, says he supports a second strip at Gatwick.

Both Labour and Conservative manifestos pledge to secure the Crossrail 2 line and Bakerloo line extensions. In addition, Goldsmith promises to work with the government to secure funding for extensions to the Sutton Tramlink, and the London Overground line to Barking Riverside. Khan meanwhile says he wants to start discussions about the next-but-one generation of rail lines, Crossrail 3 line and improved orbital rail links around London’s suburbs.

David Leam, director of infrastructure at London First, urges both candidates to focus on delivering Crossrail 2 rather than being distracted by more speculative projects.

He says: “I would get Crossrail 2 off the ground before moving to the next stage. Being the person that gets Crossrail 2 the go-ahead would be a fantastic achievement, which on past form will take 10 years.”

And he warns that Khan’s pledge to freeze transport fares for four years means he will have less leeway for investing in capital projects.

Both mayoral manifestos take heed to the pressing construction skills shortages that threaten to hold back London’s development.

A construction academy to cater for the capital’s housebuilders looks on the cards, with both leading mayoral candidates pledging support for the idea.

In addition, Khan wants the apprenticeship levy paid by London employers to be ring-fenced to the capital in order to ensure that the sums raised benefits the capital’s young people and businesses.

Goldsmith also addresses the skills issues by promising to trial the provision of labour-saving modern manufactured homes on the public owned sites he wants to bring forward.