Brexit has sent shockwaves through the construction industry, though the statistics have yet to reveal the full impact. But how far will the damage reach? Michael Dall discusses the highlights of Barbour ABI’s monthly Economic & Construction Market Review 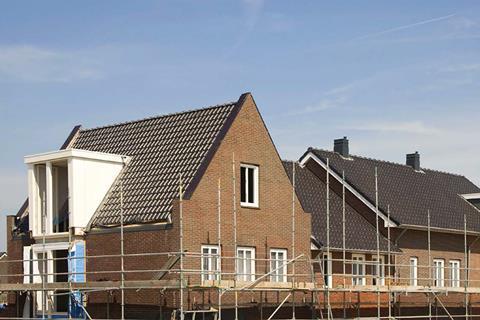 The economic fallout in the wake of the UK Brexit vote has caused a series of shocks through the economy – however, the data that shows the impact will take some time to filter through into the official statistics.

The latest PMI surveys from Markit indicate that the economy “stalled” in June. The weighted average of the surveys was 51.8, the lowest level since March 2013.

At a sector level it was the construction sector that was hit hardest after the referendum result according to Markit, with activity declining at the fastest rate since 2009. The dominant service sector saw expansion but was at the lowest level since February 2013, adding to the more negative sentiment on the economy overall.

Economic forecasters downgraded the outlook for the UK with the lowest prediction for 2016 at 1%. Some forecasters have also predicted that the economy will shrink next year, vastly different from their pre-referendum predictions.

The latest figures from the ONS show that the construction sector in the UK declined by 2.1% between April and May 2016.

Comparing output levels with May last year showed a decrease of 1.9%. It shows that May was a poorer month for the industry and it has shrank since this time last year meaning its longer term performance is not as strong.

The CPA/Barbour ABI Index which measures the level of contracts awarded using January 2010 as its base month recorded a reading of 157 for June (see Contracts awards graph, right). This is an increase from the previous month and continues to support the view that overall activity in the industry remains strong. The readings for private housing were upsignificantly in the month, but commercial offices fell slightly from 100 to 97. Commercial retail fell slightly in June but this still indicates that the pipeline of work in the private sector remains strong.

According to Barbour ABI data on all contract activity, June witnessed an increase in construction levels with the value of new contracts awarded £6.2bn, based on a three-month rolling average. This is a 2.4% increase from May but is the same as the value recorded in June 2015. The number of construction projects within the UK in June increased by 11% on May, and were 4.6% higher than June 2015.

The majority of the contracts awarded in June by value were in London, accounting for 24% of the UK total. This is followed by Scotland with 14% of contract award value (see pie chart, below). The main reason for London’s figures this month was the award to develop the Bechtel House Hammersmith valued at £275m. This is an office-led, mixed-use development which has been awarded to Lend Lease Construction due to start in January 2017. Another major office project was also awarded in June, the first phase of the Royal Albert Dock, which was valued at £100m and awarded to Brookfield Multiplex. The largest project awarded by value in Scotland was the Middle Muir wind farm in Lanarkshire, valued at £75.2m.

Residential had the highest proportion of contracts awarded by value in June with 31% of the total. The North West Lands projects at Wembley stadium was the largest project awarded in June. This is set to provide 361 residential units at a value of £80m and contributes to the sectors performance.

The infrastructure sector accounted for 20% of the contract value awarded. The largest project awarded in June was the Ferrybridge Multifuel power station in West Yorkshire which was valued at £258m. 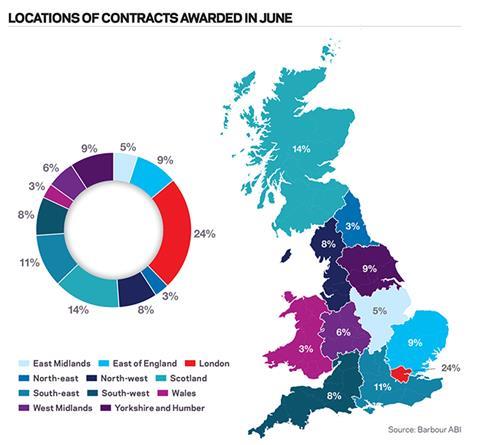 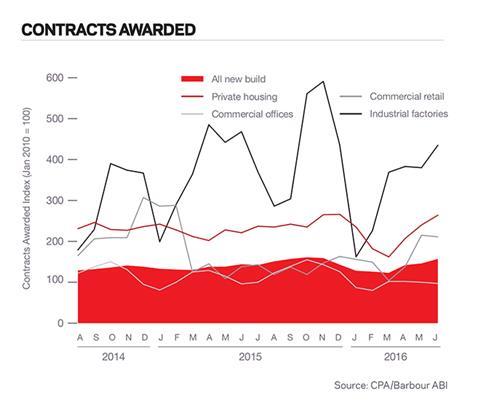 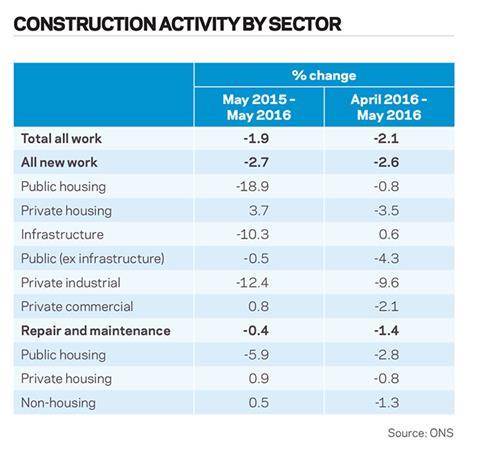 Contract values in the commercial and retail sector were lower in June and are also below the levels witnessed in the corresponding month last year.

The value of contracts awarded in the commercial and retail sector were £821m in June based on a three-month rolling average. This is a 6.4% decrease from May and a 32.1% decrease from the June 2015 figure. In the three months to June the value of contracts were 7.6% below the previous three months and 5.5% lower than the same period in 2015, indicating poorer performance in the sector.

London was the main location of activity in the sector this month accounting for 54.4% of the value of all contracts awarded, which was 29.9% lower than June 2015 (see Type of project chart and figures below). The largest contract awarded in London in June was the development of Bechtel House in Hammersmith, a 128-storey office block valued at £275m. Another major contract awarded was the Royal Albert Dock redevelopment in Greenwich valued at £100m.

Offices were the dominant type of project in the sector accounting for 81% of the value of contracts awarded this month, which is 8% lower than June 2015. General retailing is the next largest sector with 9% of contract award value, which is a 6% increase from the June 2015 figure (see Type of projects awarded, below). 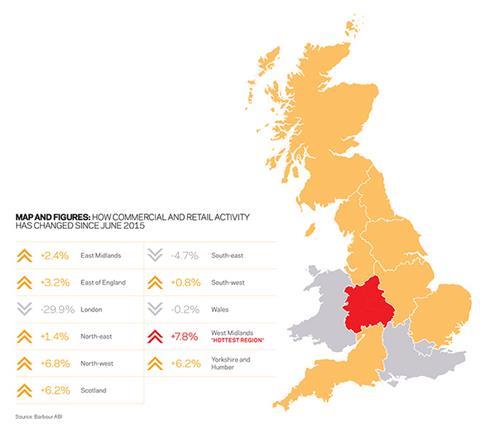 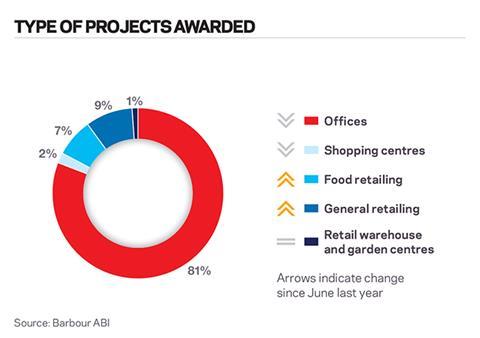 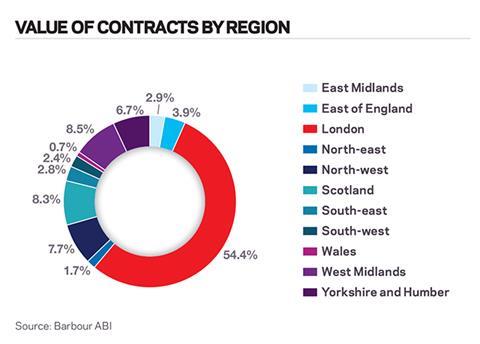 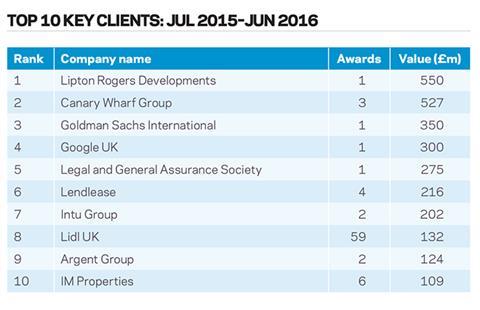 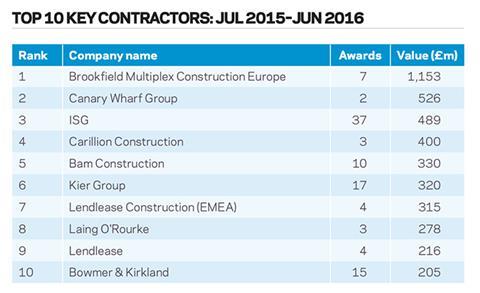