Market review: The down and ups

The UK economy looks set to have grown by 2.4% in 2015, a slowdown compared with 2.9% in 2014 – but construction’s future pipeline looks strong. Michael Dall discusses the highlights of Barbour ABI’s monthly Economic & Construction Market Review

UK GDP growth in Q3 2015 was revised downwards to 0.4%, from its initial estimate of 0.5% with the economy now expected to grow by around 2.4% compared to 2.9% in 2014. Various sentiment surveys have pointed to slower growth in the final quarter of 2015 so, while the economy is still growing, it is at a slower pace than in 2014.

The labour market continues to be the star performer in the UK economy with the unemployment rate in the three months to November 5.1%, down from a recent high of 8.4% in November 2011. Inflation also remains low with the figures showing the Consumer Price Index (CPI) rate in the UK is now 0.2% in December after dipping into negative territory at various points throughout the year. This is largely due to the falling oil price which has transferred through to drops in petrol station prices.

Over the course of the year the UK economy has performed well although headline growth has eased to an average of 0.5% per quarter compared to 0.7% in 2014. The labour market remains strong, however, and the low level of inflation is generally seen as boosting demand in the economy as wages rise higher than the general price level. However, a number of risks remain to UK economic growth in 2015. There are political uncertainties which could impact on growth, not least the potential of Britain leaving the EU with a referendum expected sometime this year.

Productivity has begun to improve but the path of productivity growth still remains below pre-recession rates. It is also important to note that while growth has been led by the service sector, both manufacturing and construction are still below the levels of activity in 2007. This highlights the imbalance in the UK economy which magnifies the impact of any business cycle downturns. General concerns about subdued global growth are also likely to weigh on the downside for the UK in 2016 with slowing growth in China a particular concern.

The value of all construction contracts awarded in the UK was £74.3bn in 2015

The latest figures from the Office for National Statistics (ONS) show that the construction sector in the UK shrank by 0.5% between October and November 2015. Comparing output levels with November 2014 showed a decrease of 1.1% (see Construction activity by sector, opposite). This provides further evidence that the industry had a subdued second half of the year.

It is clear that the housing sector remains the main component of growth within the industry over the longer term. In particular private housing output increased by 3.1% in November from the corresponding month in 2014. Output in the private commercial sector fell slightly by 0.7% year-on-year. However activity in the industrial sector was 18.5% higher. Infrastructure also increased significantly over the year with activity 11.7% higher in November 2015 compared to 2014, which indicates a broader pattern of growth over the past year.

The CPA/Barbour ABI Index, which measures the level of contracts awarded using January 2010 as its base month, recorded a reading of 143 for December. This is a decrease from November but continues to support the view that overall activity in the industry remains strong. The readings for private housing, and commercial retail increased this month but commercial offices fell to 126 (see Contracts awarded, opposite).

While output fell towards the end of the year, according to Barbour ABI data on all contract activity, the value of construction contracts awarded in the UK was £74.3bn in 2015, an increase of 15.7% compared to 2014. This is reflective of the year overall which saw growth in contract value continue with a shift to higher value projects. It is in marked contrast to last year where growth in the value of projects was lower at 2.8%.

To illustrate the increase in the number of high value projects in 2015, the actual number of construction contracts awarded in Britain last year was 11,857, a decrease of 4.7% from 2014. This is lower than growth in 2014 (10.4%) and 2013 (21%) but, with a higher value of contracts, it shows the general pattern of increasing contract activity in the industry over the year.

The largest share of the contracts awarded in 2015 by value were in London, accounting for 26% of the UK total (see Locations of projects awarded, opposite). Major projects including the Thames Tideway Tunnel works with a total value in excess of £1bn and a major new energy from waste facility in Beddington valued at £200m contributed to London’s prominence this year. The South-east was the region with the second highest proportion of construction contracts by value this year, with 11% of the total value of contracts awarded.

Finally, Scotland had a large offshore wind farm project which contributed to its 10% of project value in 2015. The Kilgallioch Forest project in South Ayrshire was awarded at a value of £300m.

Infrastructure also had a strong year, accounting for 25% of total value awarded. Clearly, the number of large value offshore wind farm projects has been a major reasons for infrastructure performing so well in 2015. It is indicative of the changing nature of the construction industry in the past year.

Locations of contracts awarded in 2015 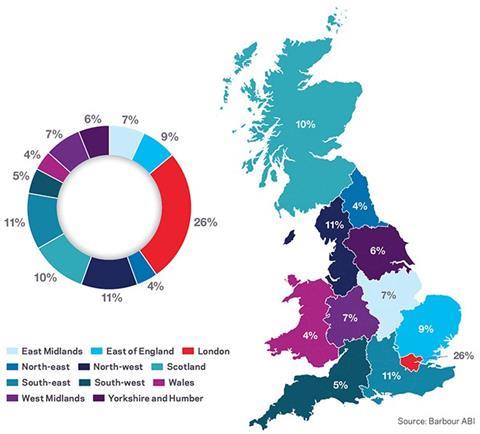 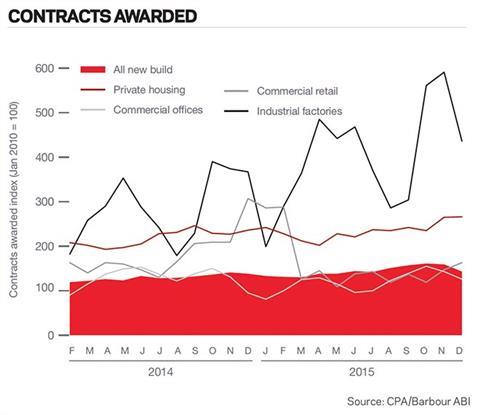 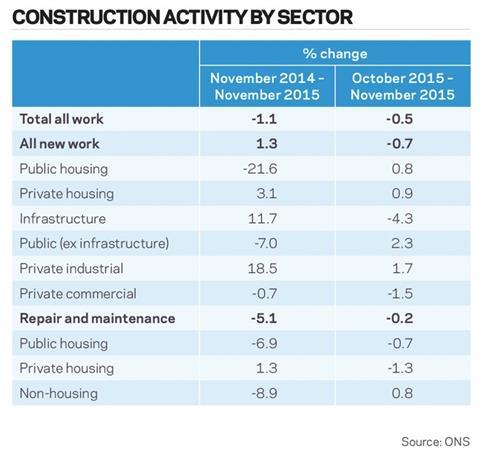 The value of infrastructure contracts increased in 2015 with a number of major projects announced. The infrastructure sector experienced high levels of activity with the total value of contracts awarded at £18.9bn, a 47% increase from the value awarded in 2014. This was a much needed improvement in a sector which had a low level of contracts awarded in the previous year and should provide a boost to output figures in subsequent years.

London was the main location for infrastructure projects in 2015 accounting for 21.1% of the total value of contracts awarded, a 6.7% increase from its share in 2014 (see map, below, and, Contracts by region, opposite page).

The award of the Thames Tideway Tunnel main works contracts contributes a significant proportion of London’s contract value with a combined total value in excess of £2bn. There were also a series of capital projects awarded by TfL for the modernisation of several London Underground lines and stations at a combined value of circa £750m. Scotland was the next most prominent location for infrastructure contracts in 2015 accounting for 13.3% of contract value, although this was a decrease of 7.2% from last year. The largest infrastructure project awarded in Scotland in 2015 was the Kilgallioch Forest wind farm which began construction in June and has a total value of £300m. 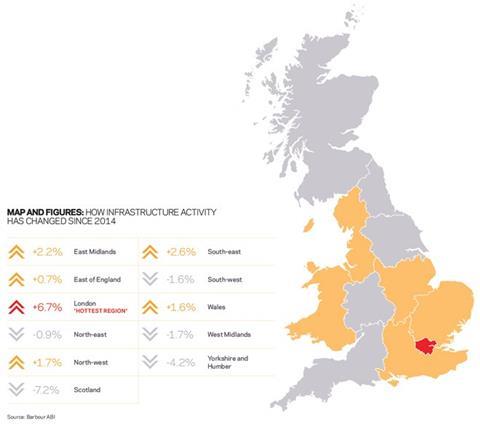 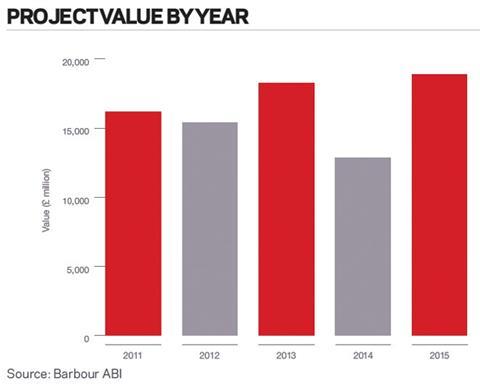 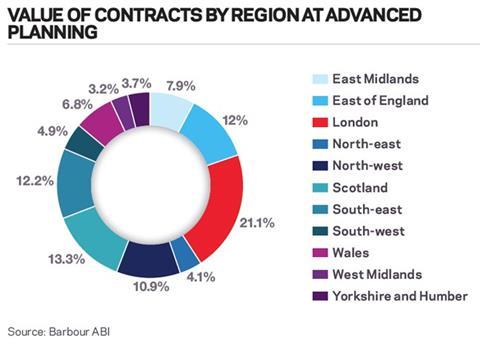 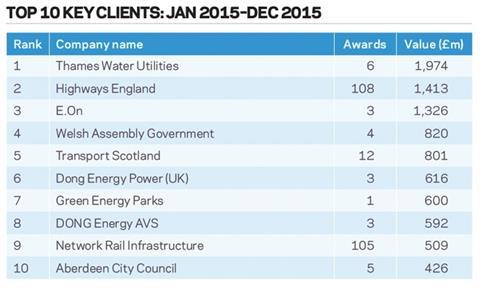 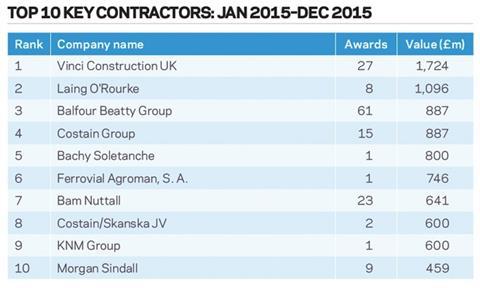