This quarter, Davis Langdon reports on an optimistic construction market, with prices accordingly on the rise … Plus a look at the effects of the Finance Bill, and the latest materials price trends

Since it was revealed that 2005 witnessed the first decline in construction output for 11 years, subsequent statistics and surveys have made very good reading for the industry.

New construction orders in the 12 months to February 2006 rose 8% compared with the previous year. This is a result of a recovery in road and water spending and a 10% growth in private commercial orders - mostly privately funded education projects, but there were also healthy increases in entertainment and offices.

In London, the office market is strengthening strongly. Since 2003, construction inflation has been restrained, compared with many areas in the North, but is now picking up. Already there are difficulties in securing competitive bids for some elements of work on projects perceived as unattractive or higher risk. Structural steel prices, having declined during much of 2005 are beginning to rise again. Concrete subcontractors have full order books and prices are testing budgets.

At the higher end of the curtain walling market, recent changes in the industry dynamic, compounded by higher aluminium and glass prices, may result in less competitive pricing.

In Wales, construction output fell last year but the year ahead will benefit from a number of large infrastructure projects. For the medium-sized builder there has been a boost in interest and even an increase in competitive tendering. But, as elsewhere, two-stage tendering is also becoming more prevalent. Bricklayers and plasterers are still in short supply but shortages generally have eased as foreign workers have come in and wet trades have been designed out.

In the North-west, activity eased last year but prices remained high. Liverpool’s Paradise Street project is one of the largest construction sites in the country, but it is the private residential sector that is currently providing the greatest momentum. The larger regional contractors now seem hungry for work, but smaller local firms less so. Difficulties in procuring and retaining good quality bricklayers and plasterers remain.

In East Anglia, workload stabilised last year and there is currently a bit of an hiatus in activity and orders. Subcontractors such as bricklayers and scaffolders report that they are no longer busy. In order to keep tenders competitive, there has been a noticeable pruning of preliminaries allowances on some jobs.

The main driver throughout the country in the short term is likely to be the private commercial sector: health and education work and, in London, offices. The education sector looks secure including further funding from this year’s Budget; the health sector less so, given the funding crisis in which it is now embroiled.

With continuing rises in energy costs, materials prices this year are likely to rise ahead of long term trend; labour costs will be driven by supply and demand but the influx of Eastern European labour has had a dampening effect on site rate increases.

In Greater London. building prices are once again expected to rise 4-5% over the next year. After that, Olympic momentum should begin to build and price inflation is forecast to edge up to 4.5 to 5.5% in the year to the first quarter 2008. Some of the regions may not experience as high inflation as they have suffered over the past couple of years and come in below London for the first time since 2002.

There were many construction materials price rises at the beginning of the year, most manufacturers blaming high energy costs - directly linked to oil prices. Since the beginning of the year oil prices have kept rising, establishing a new record of $74 a barrel for Brent crude on 24 April. The latest increases are attributed to tensions over Iran at the same time as Nigerian output has been disrupted by militants. But underlying this is the realisation

of ever-rising demand. More and more commentators are raising the spectre of the $100 barrel, though global economic growth and inflation will be hit long before that mark is reached.

Base metal prices too continue to drive upwards: copper also broke new records in late April, cash prices touching $7400 a tonne and rising, more than double the price of a year ago and four times higher than in 2003. Supply disruptions and strikes forever dog the industry but it is demand from the rapidly industrialising countries led by China that underpins the price spiral. Zinc prices have risen even faster, passing $3400 a tonne in April from just $1200 last July.

The Chinese demand-led steel price hikes of 2004 were over once China became self-sufficient in steel production. In the first half of 2005 average world prices for steel fell back by 20% but, as world demand has picked up, prices have since recovered some 7% of that ground.

In the UK, the price of fabricated structural steel continued to drift down throughout last year and into the beginning of 2006. Corus announced a £20 a tonne price rise for steel sections last October but the market was not ready to accept it. Corus tried again in February, citing raw material and energy cost increases, and may have had more success. The industry is now expecting further price rises. The British Constructional Steelwork Association predict price increases in UK fabricated steelwork of 8-10% for 2006.

The cost of reinforcement has been edging up since last summer, following the trend in Europe where scrap shortages led to a sharp recovery in the second half of the year. Scrap prices have also been rising in the UK, leading to forecasts of further increases in rebar here. These are already being factored into tender prices, where £900 per tonne is now the norm. 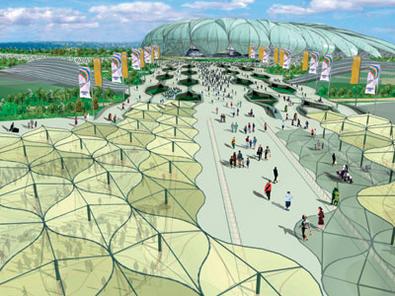 Architect EDAW’s impression of the proposed bridge linking Stratford City to the main stadium, part of its Olympic masterplan

From 2008 onwards, the industry in London and the South-east should be well into the swing of preparations for the Olympic Games in 2012. The building work for the facilities represents an average annual additional workload between now and 2012 of less than 3% of current building work in the capital, and, in its own right, does not represent a serious threat to inflation.

However, non-Olympic workload in many sectors, including civil engineering, retail and commercial offices, is likely to be on an upward curve in the run-up to the Games. The combined level of workload is likely to lead to inflationary and other pressures. In particular, a large number of high-value projects that may emerge over the next few years will expect contractors’ “A-teams” and may challenge the management capability of the industry.

Alongside the Olympics-specific projects and the commercial activity associated with a rebounding London economy, the hotels sector will no doubt seek to increase capacity. Similarly, public sector bodies in the arts and leisure sectors are likely to use the Olympics as a lever to accelerate the completion of planned capital projects. There is a danger that some of these projects may struggle to attract competitive or properly resourced bids.

Davis Langdon’s assessment is that over the period 2007-2012, Olympics associated workload will add a further 1-2% to current inflation trends, equating to an average inflation rate of 6% from 2008 onwards.

The infrastructure requirement of the Olympics is much more significant than the building element and the £3.5bn worth of work required by 2012 represents a huge addition to current levels of activity in London and the South-east. This may create more challenging delivery and inflation demands.

á Tender Price Index Davis Langdon’s Tender Price Index shows that building prices in Greater London rose by 1% in the first quarter 2006. Over the past year, prices have increased 4.5%. In 2006, prices are expected to rise a further 4-5%. After that, Olympics-related activity may begin to drive prices faster.

Davis Langdon offers a round-up of the implications of April’s Finance Bill, including asset disposal, climate change levy and the thing everyone’s talking about – REITs

The Finance Bill was published on 6 April, seeking parliamentary approval for the measures outlined in this year’s Budget. Those affecting the construction industry are reviewed below:

Real estate investment trusts (REITs) will be launched on 1 January 2007. Amendments to the draft legislation published in December 2005 include a reduction in the required distribution rate to 90% of net profits and a reduction of the interest cover test. A conversion charge will be levied on companies electing to join at a rate of 2% of the gross market value of investment properties.

Most property companies are now expected to convert to REITs and the vehicles should attract new money into commercial and residential property. Immediately after the Budget announcement, shares in most major property companies leapt up.

The government reiterated its plans from the pre-Budget report to increase and speed the delivery of sustainable housing, including the publication this summer of a new planning policy statement for housing (PPS3), to ensure that local and regional plans prepare and release more land in response to demand. A planning gain supplement is still on the agenda.

Planned asset disposals, intended to realise £30bn by 2010, include:

The government recognises the need to reduce procurement timescales and costs and sets out means of achieving this in PFI: strengthening long-term partnerships. Proposals include:

The Budget reconfirmed the government’s commitment to provide modern facilities for all secondary schools through Building Schools for the Future and the rebuilding and refurbishment of at least half of all primary schools. In support of this, further increases were announced in funding, lifting school capital investment from £6.4bn in 2007/08 to £8bn in 2010/11.

Gas and electricity suppliers have agreed with the government that they will carry out an extra 250,000 installations of subsidised home insulation over the next two years. Microgeneration technologies, such as solar heating, will be boosted by an additional £50m fund

An additional £50m was announced to help fund the installation of microgeneration technologies, such as solar heating and micro-wind, in a range of buildings including schools, social and local authority housing, businesses and public buildings. It is estimated that this could provide funding for installations in about 25,000 buildings.

The standard rate of landfill tax was increased from £18 per tonne to £21 per tonne from 1 April, in line with the government’s commitment to annual increases of at least £3 per tonne “on the way to a medium-to-long-term rate of £35 per tonne”. The lower rate of tax, covering inactive or inert waste, remains unchanged at £2 per tonne.

With sales of primary aggregate down and production of recycled aggregate up, the government claims success for the aggregates levy, introduced in 2002. In the Budget report, the government said it expected the rates of levy would “at least keep pace with inflation over time” but for 2006/07 the rate has been frozen at £1.60 a tonne.

Davis Langdon has recently issued a report The Impact of the 2012 Olympics: Inflation and Procurement. Copies of the report are available from Davis Langdon or downloadable from their website (linked below)