In the latest quarterly focus on industry trends, Peter Fordham of Davis Langdon reveals that after a slow 2005, output is climbing back up – and prices with it. Plus, a look behind curtain walls

Davis Langdon’s tender price index shows that building prices in Greater London rose 0.6% in the second quarter of 2006. Over the past year, prices have increased 5.5%. In the next year, prices are expected to rise 4.5-5%.

The building cost index rose 7.1% in the year to the second quarter of 2006. At the end of June, building operatives’ wages increased 3.5% (down from 9.5% last year), reducing the rise in the index over the year ahead to 3.4%, despite above-trend materials price rises.

The retail prices index increased 3.3% in the year to June 2006. The consumer prices index was up 2.5%, the highest margin above the chancellor’s 2% target since its introduction. These measures are expected to remain slightly above target for the rest of this year.

Figures released by the DTI confirm that there was a 1% drop in real terms in total construction output last year, with infrastructure and public sector work largely to blame. This was reflected in a slowing of the rate of construction price inflation nationally. Private housing, commercial and industrial work all continued to rise.

In Greater London, for the three years from 2003 to 2005, growth in construction activity has lagged behind most other regions, after above-average growth in 2001 to 2002. In consequence, construction price inflation was more restrained over this period, compared with regions such as Wales, the North-west, Yorkshire & Humberside and East Midlands.

Last year, activity in London started to pick up and has been on a rising trend since the middle of 2005, at a time when activity in many other regions was beginning to cool. Private commercial work has led the way but public and private housing and infrastructure have also contributed to the rise.

Most of the inflationary pressures come from materials costs (see page 54). Rises in labour costs continue to be held in check by the influx of European and particularly Polish workers, which began when 10 countries joined the European Union in 2004.

Statistics from the Federation of Master Builders and the Construction Confederation show that difficulties in recruiting most site trades have fallen since the middle of 2004. This state of affairs seems likely to continue for the medium term – or at least until other European countries start to grow and have a need to attract outside labour.

However, the most recent study, the RICS UK Construction Market Survey for the second quarter of 2006 revealed that construction output accelerated for the third consecutive quarter, pushing up skills shortages after several quarters of improvement. The survey reinforces the belief that the drop in activity in 2005 was a short-term reversal and that increases in the private commercial and infrastructure sectors will more than compensate for the slower-than-expected trickle of public sector cash.

The latest forecast from the Construction Products Association shows a cautious rise of just 0.6% in total output this year, but a more substantial increase of 3.1% in new work. Public non-housing work is now expected to drop 4% as health budgets remain under pressure, but private commercial work is forecast to rise 7.4%, led by new office building and privately financed education work. Forecasts for 2007 and 2008 show further increases in new work of 3.6% and 3.1% respectively. Other forecasts, such as those of Experian and the Building Cost Information Service, are more bullish for 2008, with Olympic Games and related work beginning in earnest.

Construction industry inflation over the next two years looks likely to be determined by the same factors: increasing output will increase pressure on resources but labour cost rises will be restrained by increased availability; oil, energy and commodity prices may ease in the short term but global demand for these products is set to rise. Demand for construction services will rise steadily in most of the country but in London the rise will be sharper, even ahead of Olympic spending.

Market conditions are likely to push prices up ahead of underlying input costs: the forecast is for a rise in construction prices over the year ahead of 4-5% in London and slightly lower in most other regions. Over the year to the second quarter of 2008, a rise of 5-6% should be anticipated in London. The rise elsewhere is likely to be a percentage point or so lower.

The curtain walling sector has blown wide open following the collapse of sector giant Schmidlin. Steve Mudie explains how this could have a knock-on effect on your office scheme

Schmidlin’s demise will have a particular impact at the top of the market, including the towers and signature schemes that are set to transform the City of London. With reduced technical and commercial competition, lower capacity and less choice, will clients be able to afford their proposed curtain wall solutions – and will they be able to secure the resources to deliver them?

The combined capability of Schmidlin and members of the Permasteelisa Group has, up to now, enabled clients and their designers to raise their game. Schmidlin’s demise and further consolidation at the top end of the market has reduced this, and increased clients’ delivery risks.

For clients with smaller or less complex unitised projects, it is not all bad news. Although workload is high and capacity tight, there is a wide choice of specialists, including Lindner Schmidlin Facades, which has emerged from Schmidlin, as well as established if less familiar names such as Schneider, Felix, or Focchi.

However, the collapse of Schmidlin is a major loss to market capacity, technical leadership, and diversity of supply. European quality standards and UK requirements are a significant barrier to entry into the UK market and although there are specialists from outside Europe such as Antamex and Yuanda in the marketplace, there is currently no obvious alternative to PG. 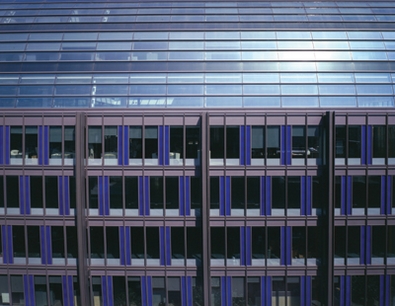 Will clients be able to secure striking solutions like London’s Mid City Place?

The failure of Schmidlin has also introduced risks into the market for large and complex projects. Both clients and contractors are likely to be taking risk-averse approaches, in terms of performance guarantees and bonds on the clients’ side, or with respect to a contractor’s willingness to accept design and performance risk.

In the medium term, clients need to recognise that high-end curtain wall capacity is a limited resource that should be focused on projects that need the skills base. Where possible, clients should work with their design teams to identify and package projects that can be delivered successfully by alternative specialists.

Innovative curtain walling will continue to have a place in the City development equation – helping to secure added value in product quality and in planning terms. In order to continue to secure these benefits, clients and their project teams should aim for design solutions with the capacity and technical capability of the post-Schmidlin curtain wall industry in mind.

In general, curtain wall prices for the past couple of years have been unsustainably low, with surplus capacity chasing too few schemes as the London office market retrenched and the European market remained subdued. Curtain wall contractors have also recently been hit by raw material cost increases in aluminium, stainless steel and glass, possibly with more to come. With reduced competition at the top end of the market, an increase in curtain walling costs can be expected.

Department of Trade and Industry figures show that construction materials prices rose 2.9% in the first five months of 2006. Most manufacturers are blaming this on soaring energy prices impacting on production costs. Some of the highest price rises relate to energy-intensive processes such as cement manufacture, where prices have risen 8%, and clay bricks, up 6% on average.

DTI figures show that electricity prices have risen 34% and gas prices 47% over the year to the first quarter 2006. However the construction industry tends to have long-term contracts with energy suppliers and some have reported that their renewed deals have risen as much as 250%.

Many thought that oil prices were heading back to more normal levels in November last year when prices drifted down to $54 a barrel following the Hurricane Katrina-led high of $67 last September; many thought the same after prices slipped from near $75 in May to $67 in June. But once again a new watermark has been set, with Brent crude oil breaking through the $78 level for the first time in mid July, as the Middle East crisis escalates.

Oil prices have a direct impact on construction sites through the gas oil used for plant and the fuel used in transport of materials. Directly affected materials such as asphalt products have undergone a 15% rise since the turn of the year.

Metal commodity prices have been the other principal driver of construction materials prices.

The price of copper pipes rose 57% in the first six months of 2006 and has gone up 97% over the year. ONS figures show that the price of insulated wire and cables rose 30% between August 2005 and June 2006. The copper price bubble appeared to have burst in May after passing $8500 a tonne, as prices slumped 25%. But, since late June, prices have staggered back upwards past the $8000-a-tonne mark.

Curiously, global copper consumption last year actually declined slightly while production increased, and many place the price rises firmly at the door of commodity speculators. But with London Metal Exchange stock levels at historically low levels, prices are likely to remain high. Nevertheless, most commentators believe that copper prices are likely to retreat in the medium term. GFMS Metals Consulting, for instance, expects prices to fall back below $5000 a tonne in late 2006/07.

Whereas it is common for materials price increases to be strongest in the first half of a calendar year, it seems likely that there will be more price rises to feed through as 2006 progresses, and increases for steel, reinforcement, glass, plasterboard, raised floors and lifts can be anticipated.

Last year’s anticipated increase in public sector spending, particularly healthcare, failed to materialise. Regeneration, housing and mixed use have, however, remained buoyant and are predicted to grow over the next few years, particularly in the South-west. There has been some recovery of the private commercial, retail and residential sectors after a couple of slow years and the market generally looks stable over the next 12 months. Experian Business Strategies forecasts growth in the value of construction output in the South-east and the South-west of 2% in 2006 but rising next year.

East Anglia and the Midlands

As a result of government funding, East Anglia and the Midlands have seen a growth in regeneration schemes, many of which incorporate housing development. However, the market continues to be dominated by education. The latest RICS Construction Market Survey registered the largest increase in activity for 18 months. Consultant staff levels and salaries have increased throughout the region – as have recruitment problems.

The market in Liverpool continues to be buoyant as the city heads for its European Capital of Culture status in 2008. It also marks its 800th birthday as a city in 2007. The £500m Paradise Street project, the biggest retail and leisure development in Europe, is on track for completion in 2008. The scheme has generated 3300 construction jobs and been partly responsible for driving construction prices faster than any other region over the past two to three years.

With office rents at their highest ever, office take-up at record levels and limited available existing space, there is plenty of demand for further development.

Across the rest of the region, there are many regeneration initiatives being launched, as many towns and areas seek to bring new life into their regional centres, such as the £500m revamp of Stockport town centre.