Tender prices are likely to rise at a slower rate over the next couple of years, as output wavers, new orders remain subdued and business confidence stays low. Michael Hubbard of Aecom reports

Tender prices increased by 4.5% over the year to Q1 2019. Construction price inflation remains against a backdrop of respectable industry output.

A composite measure of building input costs recorded a 4.1% yearly rate of change in Q1 2019. Supply chain commercial pressures are evident still from a combination of rising input costs and some constraints on output prices that can be secured.

The annual rate of change slipped to 1.9% in March 2019. The yearly rate of change is now at or around its target of 2%, with no real stand-out stories in any of the inflation categories. 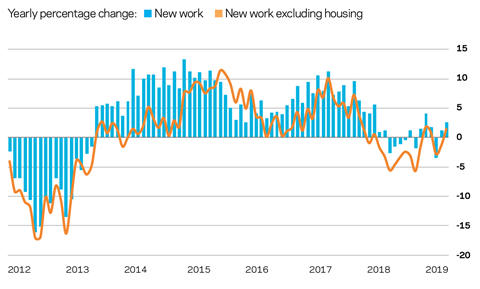 Construction all work output recorded no discernible yearly change in Q4 2018, according to the Office for National Statistics’ (ONS) latest data. This extends a period through 2018 of variable year-on-year change rates, where no definitive trend was evident. A conclusion to draw from the most recent data point is that little change in the yearly rate implies no growth or expansion of industry output. Equally, the nominal output value also indicates still respectable levels of overall workload.

One area of concern in the data is that private housing growth stalled in Q4. Unless this is just a blip and growth reappears later in 2019, then it will be of particular concern for headline industry output because of housing’s volume contribution to industry growth over the last five years. However, nominal levels of total new work posted in the latter half of 2018 will make this year feel comfortably busy, combined with existing workload momentum. Risks to the output trend further out, though, relate to new orders data posted during 2018 and how this then turns into output data. 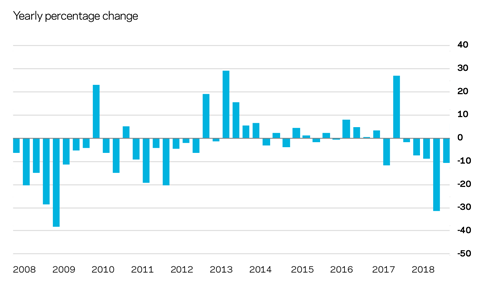 New orders for work slipped again in Q4 2018. A 10% drop over the year from Q4 2017 adds to four consecutive quarterly falls recorded in 2018. It is likely that this succession of year-on-year changes is significant in that it confirms a trend – or at the very least establishes a trend. Interpretation of the new orders data set and its timely correlation to output is not always entirely clear, though – statistical noise and the lagged effect of knowing with any certainty when new orders turn into output are primary reasons for this.

All major construction sectors recorded declines in the Q4 new orders data – housing (-7%), infrastructure (-38%) and commercial (-3%). Combined, these sectors account for well over 80% of all new work output, so the recorded falls will be felt eventually by the industry. Only the private industrial and public sectors offered positive yearly change in the Q4 data. However, these sectors account for less than 14% of all new work output, so these increases in work are not expected to move the national construction output dial materially. 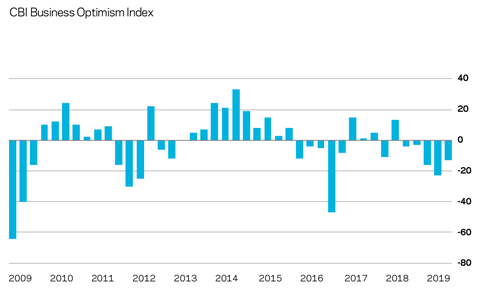 Business sentiment continues to track a lower overall trend as political and economic uncertainty weighs on confidence. The succession of negative readings in the CBI measure of optimism through 2018 underscores prevailing uncertainty at regional, national and international levels. On-going tension from slower global market conditions and trade, weaker investment intentions and international macroeconomic disagreements all contribute to the sense of drift.

Other business sentiment indicators do not offer alternative narratives suggesting an upside story. Eurozone, global and UK measures all point to flatter or slightly weaker expectations of current and near-term economic activity. In the absence of any fiscal or monetary stimulus, a period of flat macroeconomic activity might be the best available outcome over the course of 2019. 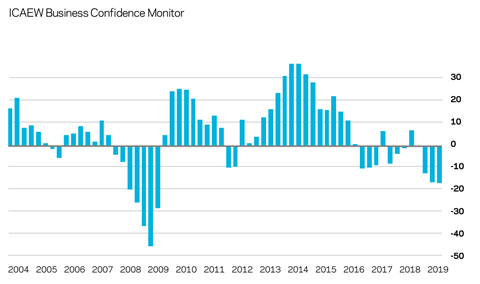 The ICAEW’s Business Confidence Monitor reports along broadly the same lines as the CBI’s business sentiment index. Confidence remains firmly negative, with sales growth slowing and a subdued profit outlook. The index also confirms anecdotal information and trends reported by the ONS and the Bank of England on GDP growth. Without recent stockpiling by a substantial number of manufacturing firms across the UK in anticipation of a no-deal Brexit in March, GDP growth would have been notably weaker. This has brought forward a proportion of economic activity and purchasing, with a corresponding amount deducted from future growth.

What is recorded at a headline UK level is replicated in every region. Investment plans are muted, reflecting uncertainty and caution, and spare capacity is emerging. A similar trend is described to that experienced in construction: namely, that selling prices have increased at a slower rate than input costs over the last two years. 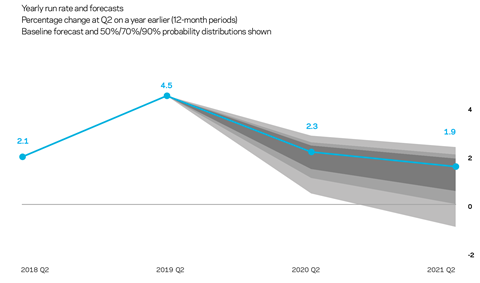 Tender prices increased by 4.5% over the year to Q1 2019. The continuing trend of rising prices is reflective of the overall workload still evident. A balancing act is at play: there is enough available work not to cut prices too much, but not enough potential work to push up prices notably either. There are downside risks linked to a disorderly Brexit, but alternative outcomes resulting from a softer Brexit – or no Brexit at all – would generate positive risks. A synchronised upturn in activity might follow where projects on hold due to Brexit uncertainty all commence at the same time, providing a fillip to workload and taking up available capacity quickly.

Aecom’s baseline forecasts for tender price inflation are 2.3% from Q2 2019 to Q2 2020, and 1.9% from Q2 2020 to Q2 2021. Assumptions underpinning the forecasts include output reverting to a long-run average without excessive volatility, elevated input costs as a result of weak sterling and some resource constraints. Downside skew to the assessed risks accompanying the price forecasts is from sustained economic and political uncertainty. 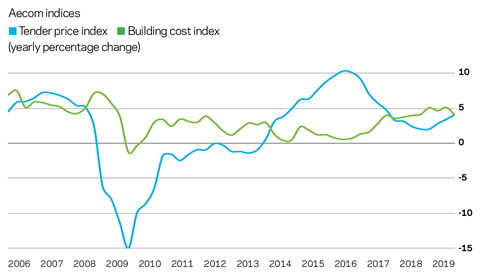 Aecom’s composite index for building costs – comprising materials and labour inputs – continued to rise at Q1 2019. The yearly change to Q4 was 4.1% and, although elevated, marks a slowdown in the rate of change experienced through 2018. Further increases on a yearly basis are expected in 2019, but at a slower rate that is somewhere nearer 3% than the 4%-5% change rate seen for all of last year. Input costs will likely remain higher overall than output prices in 2019, which maintains commercial pressure across the supply chain.

Metals commodities prices quite often reflect global macroeconomic themes, being inherently tied into the demand for and production of industrial goods. Copper, it is said, acts as something of a bellwether for global macro conditions. Copper has risen 15% since the beginning of the year, when it reached an 18-month low. It is too early to say whether this reflects a small fillip in economic conditions, market oscillations or supply disruptions. Elsewhere, there is a mixed picture for other industrial metals commodities. Iron ore, though, which has some impact on steel prices used in construction, has risen by more than 30% since the beginning of 2019.

Availability of staff and labour 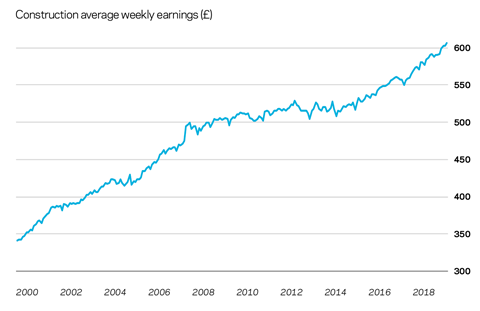 Demand for labour and staff resources eased slightly at the start of 2019. That available capacity has opened up reflects a softening of workload and a corresponding need to secure resources. Nevertheless, wages for site trades still rose on a yearly change basis, which is consistent with respectable levels of overall workload creating continued demand for labour. Having shaken off some of the seasonal lull over the winter months, wage levels for most site classifications are returning to previous trend levels. Whether they break through this trend line and move higher will depend on the strength of existing momentum in workload and how far this extends into 2019.

Lumpy risk allowances – either explicitly stated or included elsewhere in the commercial offer – have made a return in some areas of the industry, which is adding impetus to tender price momentum. This largely stems from the fear factor around Brexit and not knowing how or when the situation will be resolved. The unintended consequence of this for the construction market as a whole is that price levels rise even though output may well drift in response to a fall in new orders. 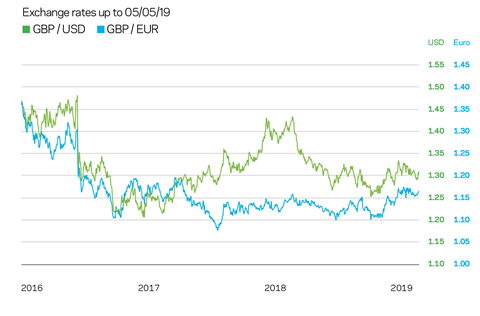 Sterling seems unable to gain any traction and strengthen against its major currency pairs – principally the US dollar and euro. Despite some shorter-term increases since the beginning of 2019, most of these have been reversed quickly, leaving a currency meandering without any particular trend at play. It is quite conceivable that short-term movements in sterling are more reflective of the prevailing political manifestations in the UK than economic fundamentals.

As sterling extends its period of weakness against its major currency pairs, the on-going commercial pressure from imported inflationary trends will remain. If sterling did strengthen, though, it would be some time before the effects of a stronger currency worked their way through into lower prices. Nor would this alleviate cash flow impacts relating to purchases of stockpiled materials and components in recent quarters, which saw UK factories stockpiling at the fastest rate of any of the major economies since the early 1990s.