Although last month’s Spending Round left a lot to be desired, there are plausible signs of a tentative recovery in construction

Tender price index ▲
Prices edged up in the second quarter as the supply chain hardens its attitude to risk and opportunity. The outlook is for rising prices after five years of declining or stagnant prices.

Building cost index ▲
Annual rate of increase tops 3% for first time in 18 months but only nominal increase in second quarter over first. Rest of 2013 expected to be flat before moving ahead again in 2014.

Retail prices index ▲
Retail prices rose around 1% in the second quarter due to higher prices for clothing and footwear and alcohol. Inflation is expected to edge higher in coming months.

Tender prices edged up in the second quarter of 2013. Davis Langdon’s Tender Price Index, which measures average tender price movement for competitively tendered projects in the Greater London area, rose by 0.5% compared with the first quarter. Is this a continuation of the “bumping along the bottom” that has characterised much of the last two years or is it the start of a more sustained rise? There have been false dawns before - prices edged up in the middle of 2011 before the Eurozone crisis destroyed any emerging confidence; prices rose at the beginning of 2012 in response to a flurry of materials price rises but, again, the higher price level was unable to be maintained.

But 2013 feels slightly different. The latest quarterly survey from the British Chambers of Commerce found business confidence in the UK to be at its highest level since 2007. Deloitte’s recent UK Futures report described a return of optimism among big businesses with major firms based in the UK planning to invest over £13bn during 2013 in growth-related initiatives, using some of the cash piles stockpiled over the last few years. The Office for National Statistics has reviewed its figures to confirm that a double-dip recession did not occur over 4Q11/1Q12 - but we are still 3.9% below the peak economic output in 1Q08. 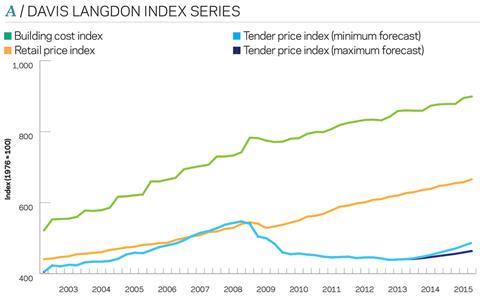 Economists are generally revising growth forecasts up for the first time in a long time. The National Institute of Economic and Social Research estimates that output grew by 0.6% in the three months to June and now forecast growth of 0.9% in 2013 and 1.5% in 2014. Lloyds recently nudged its forecast up to 1.1% for 2013 and 1.8% for next year.

For contractors, the outlook remains difficult. The latest construction output forecasts all point to a continuing decline in activity this year, led by further cutbacks in public sector work. But the latest new orders statistics show that, excluding the volatile infrastructure sector, the value of new orders in the first quarter of 2013 was the highest for 10 quarters and 16% higher than in the first quarter of 2012. This includes a 47% increase in the value of new orders for public sector work. Indeed, the latest surveys by Markit and Experian all point to an improving picture, led largely by increases in housing and civil engineering activity.

The mood of contractors and subcontractors is changing. For four years, cost increases have been absorbed and contractors have restructured but models of cost cutting and cost absorption are no longer sustainable. Contractors are now wary of risk and prefer to decline tendering opportunities where they see little chance of a sensible return. There is waning appetite for single-stage open tendering, particularly if clients can be persuaded of the merits of a two-stage approach or if framework opportunities exist. Although materials cost pressures have been relatively benign of late, contractors are wary of taking on long term fixed price risks for items such as steel.

Although the rate of insolvencies has been coming down, the industry has lost a large number of companies. Those remaining have a stronger hand to play and can be more choosy about the work they bid for. At the same time, clients are moving away from lowest bid, possibly having been bitten from decisions that have resulted in unsatisfactory outcomes both in quality and outturn price.

The sharpest increase in activity has been in the housing sector, where prices have been rising for some time. As a result, bricklayers are seeing pay rates rise and overheads and profit levels may be beginning to move. Staff are being lured to busier contractors, inevitably with higher remuneration packages. A lot of new developments are currently starting (ahead of the March 2015 funding deadline) which will place further pressure on contractors and sub-contractors. Lead-in times for certain materials such as bricks, blocks, steel and M&E components have lengthened as suppliers have previously cut back on production capacity.

The trend is clearly upwards, with momentum growing, and the impetus is with housing and infrastructure. The Spending Round announced last month was about spending in 2015-16 and the Investing in Britain’s Future report was largely about infrastructure aspirations beyond then rather than driving shovel ready projects forward now. In the private sector, activity remains largely focused on London and the South-east but elsewhere investment interest is growing.

The recommendation regarding construction prices is to be wary. If contractors quickly regain confidence in the outlook, then prices could move upwards quite quickly. In London this may already have started and prices over the next year are forecast to increase by 2-4%, rising to 3-6% the following year if construction momentum is maintained as contractors and the supply chain attempt to rebuild following events of the last five years. Outside of London, price recovery will take longer as activity remains muted, although prices have already hardened in certain sectors. Over the next year, prices will probably rise by up to 2% but a ripple effect from London will push prices higher in 2014-15 by 2-4% depending on the speed of economic recovery.

This year’s Spending Round - a two-day double act shared between chancellor George Osborne and chief secretary to the Treasury Danny Alexander - underwhelmed.
According to the chancellor, his commitment to infrastructure spending will amount to “the largest investment in railways since the Victorian age” and the biggest spend on “roads since the seventies”. But headlines for tomorrow are not construction jobs today.

The Spending Round and Investing in Britain’s Future in summary:

The chancellor rightly acknowledged that short-termism by many successive governments has usually prevailed over the longer-term needs of the country. This is a welcome and significant improvement in position, and recognises the importance of infrastructure in supporting the UK’s economic output. But with questionable progress on the National Infrastructure Plan (NIP), more could be done to relate NIP projects to an overarching strategy for the economy’s balanced development.

While he was speaking about housing specifically in an interview for website Liberal Democrat Voice, the deputy prime minister spoke for the construction industry generally - and its link to public sector capital expenditure - when he said: “The gap between intention, announcement and delivery is quite significant”. Conceivably, this will remain the case until the projects announced in this Spending Round begin later this decade.

The first five months of 2013 saw the volume of construction output in Great Britain continue to slide. Compared with the same period of 2012, total output was 4.7% lower, with new work down by 6.2% (at constant prices). The fall in construction activity was most exemplified by public non-housing work, where the volume of output was down 18.3%, a loss of £150m a month.

The only sector to register an increase over this period was the much-reduced private industrial sector. The sector declined from £6.4bn in 2007 to £3.4bn in 2011. Last year saw a bit of a recovery in factory building and the trend has been maintained into 2013 with sector output 6% higher but this represents an increase of just £81m.

The private commercial sector continued to disappoint, with output in the first five months of 2013 9.2% lower than in the same period of 2012, with retail work showing the weakest performance. 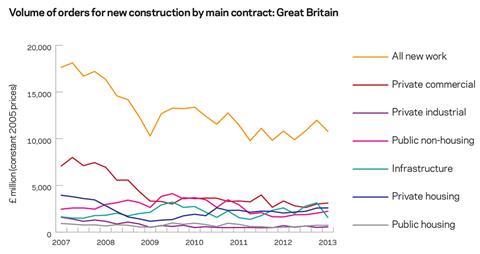 ONS figures for the volume of orders for new construction by main contractors in Great Britain have been quite erratic over the last two years including numerous revisions to the data, for example, a massive 15% upward revision to the 4Q12 new work total. The value of orders in 1Q13 is reported as being down 6.9% on the previous quarter at current prices or 10% lower at seasonally adjusted constant prices. However, it still represents the highest quarterly return for two years at current prices and it remains to be seen whether this figure is also subsequently revised upwards.

The latest level of total new orders is still only at 60% of the value of work being awarded to contractors in 2006/7. Private commercial orders are running at just 42% of their 2006 level and private industrial orders are down at 34%.

The volume of orders for infrastructure work is now considerably higher than it was in 2006. But the volume for 1Q13 disappointed badly and was the second-lowest total since 2007: at just over £2bn, the volume was 35% lower than the average volume of the previous four quarters with all sub-sectors except harbours underperforming expectation.

Orders for education work were stronger following the hiatus at the end of 2011 and beginning of 2012.

Markit’s latest monthly Construction Purchasing Managers’ Index posted a further moderate rise in business activity in the UK in June. This is the second month running that has seen a rise, prompting optimism of a sustained recovery.

The pace of new orders expansion hit a 13-month high, and four times as many companies anticipate a rise in output over the next 12 months as those that forecast a drop.

Provisional figures for the second quarter 2013 show that the Building Cost Index rose by 3.1% compared with the second quarter 2012. Most of this was the result of the one-off withdrawal of the National Insurance concession on holiday with pay schemes, largely unique to the construction industry, at the end of last year.

Over the year ahead, the rise in the index is forecast to drop to about 2.1%, picking up to 2.4% during the following year.

Directly employed operatives in the building and civil engineering industry received a 2% wage increase in January. Employees under the BATJIC agreement, generally working for smaller Federation of Master Builders companies, enjoyed a 2-3% pay rise from 17 June. The index assumes a further 2% wage increase from January 2014 for building operatives, in line with agreements already in place for electricians and steelworkers.

Construction materials prices in the first five months of 2013 rose by just 1.1% according to the Department for Business, Innovation and Skills (BIS), lower than the 1.3% recorded in 2012 and way below the 6.2% and 5.1% recorded for the same periods of 2011 and 2010, when steel prices were rampant.

Weak demand has suppressed steel prices throughout the world but steel’s raw material prices have reduced pressure on steel manufacturers to push for increases. Iron ore prices have fluctuated quite wildly, rising sharply at the beginning of the year but slumping more than 25% since February to a level well below last year’s average price. Coal prices have fallen more than 20% since February and are nearly 40% lower than in the second quarter last year. Similarly, scrap prices have fallen 8% since January and are 14% lower than this time last year.

Weak global demand and, particularly, a reduced level of growth in China, has reduced demand for commodities across the board. There has been a 10% fall in the Economist’s Commodity Price Index since the beginning of February.