Mary Rose museum given go ahead 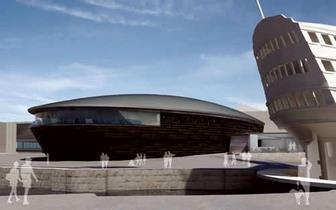 Portsmouth council has approved the planning application for the £35m Mary Rose museum, designed by Wilkinson Eyre Architects with Gifford acting as structural and M&E engineer

The building will be clad in timber planks with inscriptions derived from carved symbols used by the Mary Rose crew to identify their belongings.

It will provide 1700m2 of gallery space on three floors, displaying the history of the warship which was once the flagship of Henry VIII’s fleet. It sank in the Solent in 1545 but was raised from the water in 1982, and has been undergoing conservation ever since.

John Lippiett, chief executive of the Mary Rose Trust, said: “We have reached a milestone in the project and taken another step in the fascinating journey of the Mary Rose.”

The Heritage Lottery Fund has agreed to provide £21m for the project. The Mary Rose Trust has raised more than half of the £14m needed to match the grant.