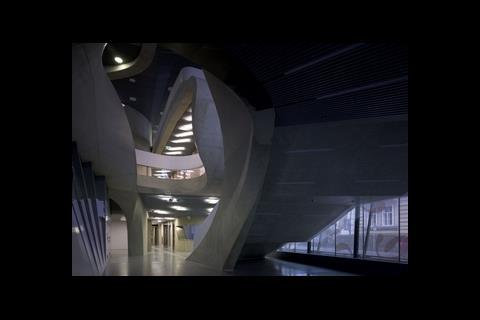 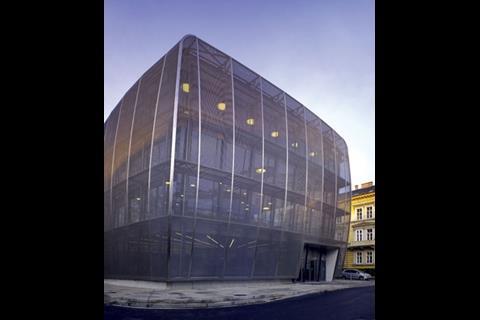 Haus für Musik und Musiktheater – MUMUTH – is a faculty building for the University of Music and Performing Arts Graz, in Austria

Architect UN Studio and engineer Arup hit soaring notes of their own in meeting the brief with these sweeping concrete forms wrapped in a glass and mesh skin.

A university facility by day, at night it can be transformed into a public concert venue. This is achieved by two elements: the unit-based part of the building, the box, situated on the right side, and the movement-based part, the blob, on the left side of the building as seen from the main street. The box is the theatre and the blob is the public entrance and foyer.

On performance nights the student entrance is transformed into a wardrobe using mobile closets, and movable ticket desk and screen bulletin are placed underneath the staircase. Concert-goers ascend a sweeping staircase leading to a large foyer on the first floor and into the 450-seat auditorium.

The auditorium itself is adaptable for a variety of performances, from solo instruments to dance, to full orchestra. What appears to be a musical pattern applied to the walls of the theatre is in fact an acoustical baffle.

The £16.9m building opened on 1 March this year with a performance of Mozart’s The Magic Flute.

The facade of the Music Theatre in Graz is enveloped in a membrane of stainless steel mesh. This durable material lowers energy consumption by blocking direct sunlight from entering the building by 50%.

Energy consumption is further reduced by the use of an integrated natural ventilation system in the public circulation areas. The entire ground floor is column-free, with a steel parachute construction supporting the weight of the concrete floors above. The building is not climatised through the use of air conditioning systems. Instead air is sucked in through the windows; warmer air then rises to the top of the building and is expelled through openings in the skylight.

By integrating this natural air flow into the design of the building, ventilation ducts could be eliminated, thereby also reducing material usage.