Arup is taking the LEED 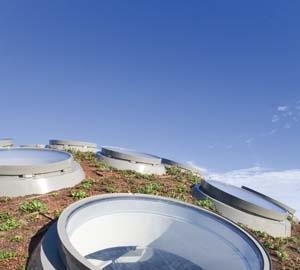 Arup’s global reach means it not only designs buildings to BREEAM ratings but to the American green standard, LEED. Here are just some of the practice’s projects and LEED-influenced solutions.

The Leadership in Energy and Environmental Design (LEED) green building rating system is the most widely used environmental assessment tool in the world. It is not as old as BREEAM but it is starting to appear in the UK as global corporations compare assessment tools and look to qualify their worldwide building stock under one green rating.

Unlike BREEAM, which requires external assessment, LEED encourages consultants to have their staff train as LEED-accredited professionals, who present a LEED-assessed design to be independently certified. While this method may seem less rigorous, it has encouraged US firms to become more environmentally aware and influenced the speedy uptake of the green agenda by architects, engineers and other consultants. There are currently an estimated 25,000 accredited professionals in the US.

There are LEED ratings for new construction, existing buildings, commercial interiors, retail, schools, homes, core & shell projects and neighbourhood development. Like BREEAM, the rating revolves around the accumulation of points across a number of criteria. In LEED’s case these are: sustainable sites; water efficiency; energy and atmosphere; materials and resources; indoor environmental quality; and innovation in design. Buildings that achieve 26-32 points are deemed Certified; those that get 33-38, Silver; 39-51, Gold; and 52-69 Platinum.

Fiona Cousins, principal at Arup’s New York office, says LEED is bringing more awareness of green design. But she warns against a culture of points chasing. “We must not lose sight of constructive dialogue between architects and engineers, and the potential for great collaboration and innovation in design industry,” she says. “There has to be room for maneouvre or we will end up building to standard patterns.”

A 2.5 acre living roof, blanketed with 1.7 million native plants, is one of the outstanding features of CAOS. This facility replaces a previous incarnation of the Academy of Sciences. It is larger in total floor area but smaller in footprint, returning an acre of green space to the park. The planted roof will reduce stormwater run-off from the site by at least 50% – some two million gallons annually – and collected rainwater will be used for irrigation and other non-potable uses. The academy will be constructed from largely recycled and renewable materials including sustainably harvested timber and recycled steel. Demolition from the old building was recycled.

Water saving and recycling has extra benefits in the US, where building owners have to pay per litre of waste pumped back into the city sewers. Here, waste water is collected, treated and stored for reuse flushing WCs and urinals, while stormwater is harvested and stored in huge tanks for irrigation. The result is that almost no mains (potable) water is used for toilet flushing and two-thirds of the building’s total water use is recycled or captured rainwater. Other measures include automatic shut-off taps; meters to monitor irrigation water and detect leaks; and a drift eliminator system that recaptures fine mist in the cooling process in the cooling towers to increase water efficiency.

This is a 33,300m² building for gas traders at a major oil company in Houston. A large part of the environmental design was the use of extensive daylighting to the trading floors. However, the design had to eliminate any glare that might impede the use of multiple VDUs. Extensive solar studies and animations helped to shape and confirm shading effectiveness. Sun exposure and illuminance calculations ensured adequate daylight while keeping glare and solar ingress to a minimum. The energy impact of daylight was also studied and the resulting data was used in energy modelling and the design of electric lighting controls.

This environmental studies centre could not be seen to perform poorly at any cost and subsequent results from monitoring have shown it deserves its Platinum rating. For instance, the 270m2, 30kW roof-mounted photovoltaic system has been proven to supply more than enough power to exceed the hourly electrical energy demand of up to 26kW for at least the four central hours of the day. This demand includes power to lights, ventilation fans, the electrical components of the boiler, and plug sockets. Predictions that the PVs will supply 50% of the building’s annual power appear to be in reach, with monitoring continuing.

Gaining LEED credits for ‘optimising energy performance’, ‘green power’ and ‘themal comfort design’, the raised floor air distribution and ground coupled heat pump system provide the Kresge Foundation with environmentally sound, efficiently distributed heating and cooling. Water passes through 40 bores driven to 122m below ground, where the constant 13ºC temperature heats or cools it depending on the season. This maximises the efficiency of heat pumps from which air is piped throughout the building at low level (17ºC) and extracted at high level. Savings are also made in the use of less ductwork and ease of maintenance to low-level fans.

Environmental measures at this dramatically curved research centre include low-pressure underfloor air distribution; photovoltaics; triple-glazed windows; and thermal mass. One of the most evident is the automated shade control system to the south facade. Orientated to capture the winter sun, this facade allows light to flood in and provide more than 75% of the lighting for occupied spaces. However, with light comes heat and the three-storey block required an active shading system to guard against glare and solar gain. The combined impact of these strategies is to reduce energy consumption by 89% compared with a typical building.

The radical architectural design of this building – a glass facade over-clad by a skin of offset stainless mesh panels –is also an important environmental feature. The gap between the glazing and the steel cladding acts as a solar chimney. Heat from the sun warms the steel outer skin and the air trapped between it and the glass facade. The warm air rises up this vented stack, pulling cooler air through and out of the building via the open windows in the glazed facade. The effect is free air-conditioning. The building’s stainless steel skin also allows good daylight ingress while eliminating glare, cutting down on artificial lighting requirements by some 26%.