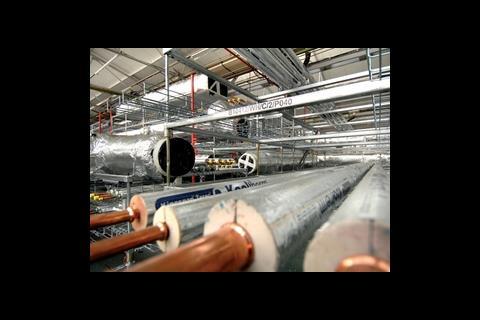 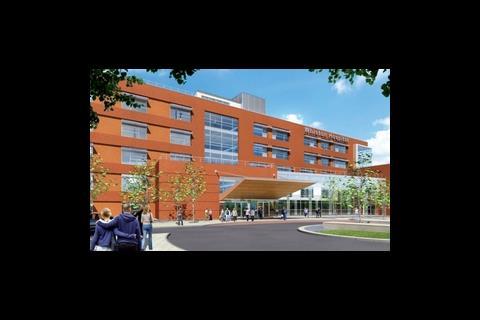 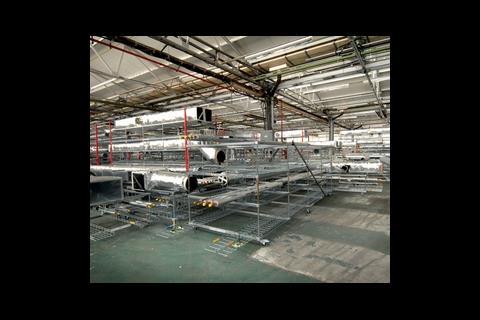 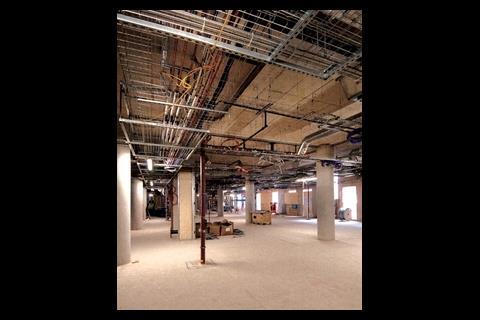 M&E modules in place on the unusually uncluttered site. 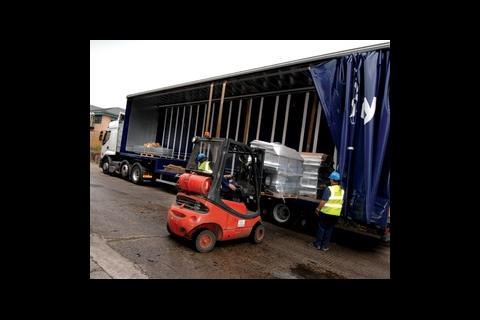 Stacked modules, shrinkwrapped for protection, are only delivered to site when they’re needed.. 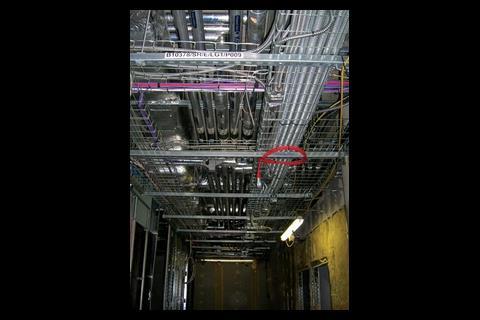 One of the UK’s biggest modular M&E installations is taking shape on Merseyside.

For a construction site, the top floor of the NHS’s flagship Whiston Hospital project in Preston, Merseyside, is unusually quiet and uncrowded. There is little clutter and floors are remarkably clean for a building that was only topped out in January. Partition installers have come and gone. But, unlike a traditional site, there are no walls yet, just head-tracks on the ceilings that mark where the walls will be installed. This leaves the way clear – literally – for the M&E crew to do their very modular best.

Whiston is one of the UK’s biggest modular design projects in terms of off-site prefabrication of M&E services, wet pods and exterior cladding. The hospital will have about £100m worth of M&E services when it finally opens in spring 2010. It’s part of a two-hospital single contract, a £338m, 25-year private finance initiative awarded in June 2004 by the St Helens and Knowsley Hospitals NHS Trust.

The largest of the two hospitals is the 75,000m2 Whiston building, a new-build 963-bed acute centre. The project demands demolition of several red-brick hospital buildings, some dating back to the 1890s, but 12,000m2 of the old floorspace will be refurbished.

The other part of the contract is for a 25,000m2 new-build diagnostic and treatment centre across the road from St Helens Hospital, which is about a 20-minute drive from Whiston. When completed in September 2008, the new St Helens building will have about £25m worth of M&E services.

Hospital services operating in the old Whiston buildings will decamp to St Helens when it opens, allowing the demolition and revamping of what will remain of the Whiston site.

Originally, Whiston Hospital was to have five levels – even up to three months before financial close. But from the earliest days financial pressure subjected the contract to much value engineering. Level five is gone and level four has been downgraded to a shelled area, fitted with rudimentary M&E including fire detection equipment, minimum heating and some lighting to allow for maintenance.

The design revamp focused even more heavily on the repeatability concept. Taylor Woodrow and its supply chain partners are keen to point out that offsite manufacturing does not mean one size fits all. But where common elements can be found, design has tended towards making a room repeatable if the trade-off between client needs and budget can be agreed. The challenge was to work with the client early on to identify repeatability areas, which have ranged from complicated operating theatres to wards, toilets and common areas.

The result has been that 4000 of the 7500 rooms across the two hospitals are repeatable, says Kevin Morrissey, a project manager at M&E contractor NG Bailey. “We had to look for standardisation of rooms and what can you do to make it repeatable,” he says. This required a good relationship with the client and all suppliers in the strategic alliance partnership (SAP) bringing something to the design table. The SAP, headed by Taylor Woodrow, brought the supply chain together to consider where everyone could design in standardisation elements to allow for prefabrication.

Ideally, the design freeze was needed at least 12 months before first fabrication in order to get the supply chain ready. Inevitably, some client user-groups were still pushing for changes late in the day. Also, some supply chain partners were making unannounced changes, such as to ceiling void depths through unspecified down-stands, projections and beams.

Morrissey says there could also have been more co-location of design teams allowing NG Bailey, Taylor Woodrow, RW Gregory and others to work in one office. “This is essential when you have up to 100 drawing changes in a day,” he says. The first two have been operating in the same building for the past 12 months of the construction phase. “Eighteen months ago, we had teams from Capita, Arup and RW Gregory working from cities such as London, Cardiff, Bristol and Manchester. But we have done well regardless and in some areas much better than planned.”

NG Bailey is just completing its first stint on site at Whiston, where the M&E installation is 60% complete as against 35% if it were a traditional non-modular build. Time spent on site is a lot less – 12 weeks rather than 18 weeks.

These benefits are just some of the reasons why modular design was implemented from the start, according to the main consortium members. But it’s been a steep learning curve. “We’ve had a flourish from time to time into modular buildings, such as Portakabins,” says architect Ron Morgan, director and leader of the health care sector at Capita Architecture. “But this project is big on it in every way, allowing us to prototype it, test it and multiply it, and get rid of all the issues. From our perspective the bonus is improvement in quality. This is because the M&E workers are working at an ideal height in their factory and not on ladders on site.”

The benefit, says Morgan, is not so much in finishing the project more quickly, but rather a reduction in the risk of going over time. “If a project is set to over-run, then people will work faster and quality can suffer. This improvement in quality is a big point for us.”

The off-site model was not bolted on to the project. It was the strategy from the start with several golden rules, such as repeatability: “If a room could be reproduced five times or more, then it was to be an identical, regular and rigid structure. Think of it like Lego. The client can build anything they like as long as it’s Lego. They must work with regular patterns.”

Convincing the client to seriously consider the Lego option has led to the number of repeatable wet pods – bathroom, washrooms and toilet areas – to rise from about 200 to 800. In fact, all bathroom and WC facilities in both hospitals are pods, supplied by Manchester-based Panaloc.

The pods have high-pressure laminate walls and ceiling finishes for low maintenance. Neat flush-access panels replace traditional bulky integrated plumbing system (IPS) units and the electrical system incorporates the same modular wiring as the rest of the building. The pods, with protective outer panels, were moved into position before the M&E modules were hoisted into place around them. Plumbing and electrics are simply ‘plug-and-play’.

Panaloc also prefabricated more than 25,000m2 of facade panels before trucking them to site ready to be hoisted into place by crane. About 80% of Whiston Hospital’s facade is being installed fully finished, complete with render, brickwork and windows.

Ken Dickinson, NG Bailey’s operations manager for the project, says modular design has paid huge dividends for M&E. “We have all had experience of prefab before on a much smaller scale, but this project required radical thinking. Most people are for modular work but the challenges of early design freeze, finding manufacturers that can deliver on time and coordination of all manufacturing can be huge.”

However, once you embark on it, there is no going back, he adds. “That would have been disastrous.”

NG Bailey invested £5m in its Bradford prefabrication factory. It also bought and revamped an 1800m2 warehouse in Warrington to be a logistics centre where modules are stockpiled until needed. This reduces the number of deliveries to site, co-ordinates just-in-time installation and minimises the inconvenience of construction to hospital neighbours.

Before M&E installation can begin, floor drainage systems are put in place, including plumbing for the wet pods. Partitioners then move in, but only to fix on the ceiling the head-tracks that mark out where walls will eventually be installed after the first visit by M&E contractors.

When M&E teams arrive, they have free rein across open floor areas. They wheel in the modules which have arrived stacked several high, ready to be separated. Each module comes complete with gripper-wear for putting them in place with shot-fired fixings into the ceiling. A unique identifying number on a module’s frame denotes its floor and exact placement. Small battery-powered fork-lifts hoist modules into position to be fixed into place.

The 1500 heavy duty service modules incorporate fully co-ordinated and engineered, pre-lagged and labelled duct and pipework services, along with integrated electrical containment systems. The 2700 light-duty modules consist of pipework and containment systems only. Wiring is run through the installed modules.

Around 200 preassembled, preconnected composite distribution boards incorporating dual circuitry, emergency changeover of supply, automatic lighting controls, metering and BMS control have been built off-site. These assemblies include installation bracket-work and containment systems and are shrink-wrapped to avoid site damage until the unit is ready to be energised.

Because the boards are literally plugged into the electrical system, NG Bailey designed special safety connectors with wire clips and warning tape stating “on load”. These ensure connections cannot work loose, arc and start a fire.

“Normally you would lose electricians in those distribution cupboards for weeks on end,” says Bailey’s Morrissey. “But less interface with other trades means we can speed up our work. So the partitioning contractor now has the tricky job really, because we have the open areas to work with.”

On-site work started in 2006 and at Whiston a temporary power plant had to be built to keep the old buildings running while demolition took place around them. In the new hospital, three Viessmann ‘Vitomax 200’ 4.5MW low-temperature hot water boilers await commissioning. Separate but unused venting has been set up for a combined heat and power plant should the hospital decide on one in the future.

In the end, says Capita’s Morgan, modular design is as much about getting the client on board as it is supply chain partners, and this is a hard thing to do. “We will have to do more work with the client on this in the future.”

Yet Morgan is sceptical on the need for co-location of large parts of the design team. He feels it would be just too expensive for firms to have their personnel based away from their main offices for several years.

But, “given the achievements we’ve had”, Morgan says he would gladly work with modular design again.

So how would he feel about working in the traditional way again? “Not if I can help it.”

Whiston is RW Gregory’s largest modularly planned project, says John Gosling, partner in charge of the contract. “We’ve used if for some modular wiring and plant coil work in schools, retail and offices. But we’ve never used it on this scale before.”

One effect on design work is more standardisation of material, Gosling explains. For example, on a traditionally procured project, ductwork might be reduced in size depending on substance flow. But at Whiston, where possible ductwork has been single-size if there are no knock-on effects. “It’s cheaper in the long run to buy one size and faster to work with just one size when assembling modules.”

The biggest challenge is getting design completion much earlier than on traditional projects – about eight to 10 weeks sooner. “But getting buy-in from client and sometimes the architect can be hard,” Gosling says. “In this way, the M&E consultant finds itself the meat in the sandwich between client and contractors.”

A benefit for everybody is the safety record of this method, something which appeals to some continental consultants. This is particularly true in Spain, says Gosling, where the consultant is responsible for health and safety on site.

Would he do it again? “Many contractors are wary of it because of the initial expense for factory overheads. But modular design is definitely the way forward and we would work with NG Bailey again.”