Corstophine & Wright Architects has drawn up proposals to replace a 1960s development that lines one of the remaining sections of Birmingham’s Inner Ring Road with three tower blocks, the tallest of which would be 56 storeys.

The scheme would deliver around 1,800 homes and replace the six-storey Ringway Centre on Smallbrook Queensway. It was designed by James Roberts, architect of the Rotunda – Birmingham’s most famous 1960s building.

Corstorphine & Wright’s proposals, drawn up for Commercial Estates Group, also include retail and commercial uses at the lower levels of the blocks, the shorter two of which would be 44 storeys and 48 storeys respectively. 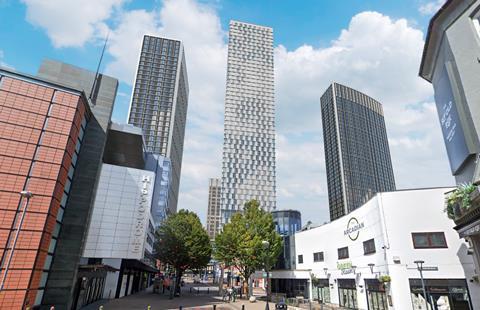 Additionally, CEG said its proposals would create extensive new public realm, contribute to the greening of the city centre, and improve connections with the Chinese Quarter, the Gay Village, and the emerging Smithfield area. All lie outside of the “concrete collar” created by the post-war Inner Ring Road, and marked by the Ringway Centre.

CEG floated plans for the partial demolition of the Ringway Centre in 2017. Designs by NORR Architects proposed the removal of roughly half of the 240m-long structure – including its bridge over Hurst Street – to make way for a 26-storey tower and nine-storey shoulder building.

Campaign group the Twentieth Century Society and Birmingham Civic Society both opposed the plans at the time.

Earlier this year, the Department for Digital, Culture, Media and Sport issued a new five-year certificate of immunity form listing on the entire run of the Ringway Centre. 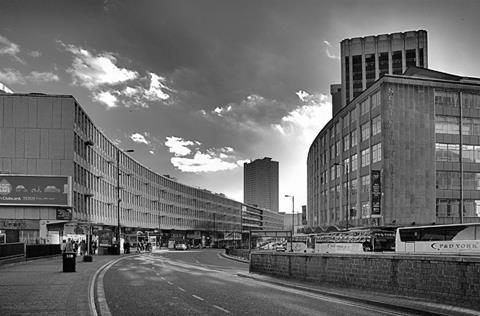 CEG head of residential development James Shimwell said the Corstorphine & Wright-designed proposals would breathe new life into the Smallbrook Queensway area and create new routes into and out of the city centre.

“Throughout the development of our scheme we have put particular effort into ensuring that our proposals for much needed housing within the city centre also help to create an extensive new public realm which can be enjoyed by those living and working in the area,” he said.

“We are working in close partnership with the council to get these proposals right, regenerating a significant site in the city centre.”

The proposals are subject to a pre-application public consultation that will run until 18 July.