A feeling for snow 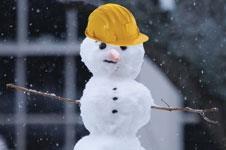 How do construction contracts deal with freak weather conditions?

Following the big freeze many contractors and subcontractors will be wondering how much the snow-enforced delays have cost them at a time when many were already struggling to keep their heads above water. They will have to check their contracts to find out whether they are entitled to an extension of time as a result of such weather, but the position may not be clear.

This is not the first time there has been uncertainty as to where the risk lies when exceptional circumstances beyond the control of both the employer and contractor have brought numerous construction sites to a halt. During the foot and mouth crisis, contractors in the countryside were forced to suspend works and were often not allowed access to the site. Contractors had to rely on “force majeure” clauses within their contracts which usually cover war, floods or “acts of God” affecting the performance of the contract and beyond the control of either party. However, many standard form contracts do make specific provision for adverse weather conditions.

If the contract is under JCT 2005, “exceptionally adverse weather conditions” may give rise to an extension of time, but not a claim for loss and expense. The architect decides what counts as sufficiently adverse.

NEC3 attempts a more precise approach, providing for “weather measurements” to be set out in the contract relating to cumulative rainfall, days with rainfall over 5mm, days with air temperature of less than 0ºC and the number of days with snow lying at a specified time. To be entitled to an extension of time (or “compensation event” under the NEC) the weather must be shown to have occurred on average less frequently than once in 10 years. However, contractors will have to wait until the end of February to determine whether the number of days with snow or freezing temperatures exceeds the relevant average for that month. Only the extra number of days of snow or freezing temperatures will count as a compensation wwvent. For example, if the 10-year average for the month of February is two days of snow and in February 2009 we see three days of snow, only the one additional day can be classed as a compensation event.

There are potential problems with the NEC3 approach to weather measurements. First, there is no reference to the amount of snow which has fallen. The month of February may regularly see two or three days of light snow, but there is a huge difference between a light sprinkling of snow and heavy snow necessitating closure of the site, yet the contract does not differentiate between them. Secondly, the place where the weather is to be recorded is to be set out in the contract, and therefore may not be the site. If snow is lying at the site, but not the place named in the contract, there would be no compensation event and the contractor would not be able to obtain an extension of time.

Additional costs incurred by the adverse weather may be recoverable under NEC3 although the precise terms of the contract in this regard should be reviewed.

Even if last Monday’s record snowfall does entitle a contractor to an extension of time, a contract under the same terms might not allow an extension of time for similarly bad weather in future years. The exceptionally adverse weather currently being experienced across the country, and any other extremes of weather as predicted by global warming experts may well skew the averages which are used as a point of reference and therefore make it harder in the future for contractors to claim exceptionally severe weather conditions.