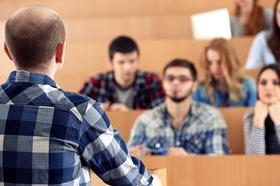 Leading construction bodies have raised concerns over the lack of female students and funding squeezes for science subjects after publication of this year’s A-level results.

Aecom’s chief executive for civil infrastructure for EMEA and India warned over the low levels of female students opting for science and technology subjects. Speaking about the results he said: “While this year’s A-level results show rising numbers of students attracted to STEM subjects, there is still a significant gender gap.

“It appears that efforts to promote STEM careers are still largely falling on male ears. Technical professions, such as engineering, are keen to hire a diverse range of new entrants, both at A-level and graduate level, but there are still too few female students studying STEM subjects at school. This gender gap prevalent at A-level is then reflected in the numbers entering the technical professions, which is an issue industry is urgently trying to address.

“For example, compared to five years ago, the UK has increased its A-level maths intake by over 15,000 students, but just 30% of these are female. A similar story exists with physics, where only 21% of the additional students are female.”

The Building Services Research and Information Association (BSRIA) warned that science A-levels could be cut due to a “cash squeeze” and other financial pressures at UK sixth-form colleges. The body has warned that it could hinder the search for suitable, skilled engineering graduares, with many colleges losing up to a third of their income between 2011 and 2016.

Julia Evans, chief executive of BSRIA, said: “This is a shambles and a worry for the future of science, engineering, the construction industry and the economy at large. Funding for the sciences is crucial for the qualifications and skills required for our future engineers. Government needs to think proactively and long-term about this - which doesn’t appear to be the case right now. A reduction in such funding is certainly a false economy when businesses are struggling to find the talent they need.

RICS global director of built environment professional group Alan Muse said that it is unlikely the construction sector will be the chosen destination for many young people. According to the RICS unless a new generation of engineers are trained 27,000 construction projects a year will be at risk by 2019.

Muse said: “On that basis, we need to make it clear to young people that construction is not an inferior career choice to those that are perhaps mentioned more frequently in the classroom - it’s an exciting, challenging and rewarding industry for all levels of academic ability. Particularly in the surveying sector, there are fantastic opportunities to help plan and manage the creation of iconic buildings and infrastructure projects. RICS’ Degree Apprenticeship pathway is just one way that we hope to provide a pipeline of talent for tomorrow.”