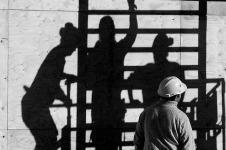 A fall in activity was recorded in all three sectors tracked by Experian, with the civil engineering sector in particular showing a markedly more severe decline of nine points to 34, the lowest measurement since April. The survey also covers the residential and non-residential sectors.

Verity Howell, senior economist at Experian, said: “August’s figures suggest that there is a real risk of a 'double-dipper' recession, certainly in the construction industry. The sector had seen some improvement in conditions in the past few months, but this was not the case in August. Whether this is just a blip or a more sustained deterioration remains to be seen.

Five of the 12 regions and nations saw a decline in their indicators, with Northern Ireland’s dropping by six points. The East Midlands, in contrast, saw a four-point rise, and broke into growth territory for the first time in 14 months. The indicator for Wales also rose above 50 in August.

Meanwhile, around 17% of respondents reported that financial constraints were affecting their output – a significant jump from the previous two months.