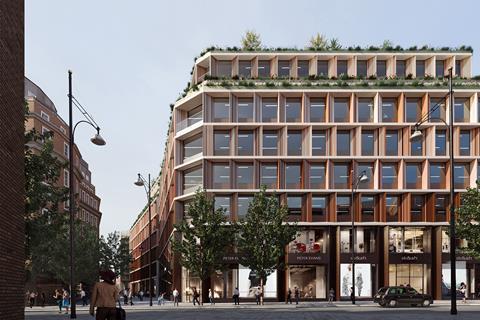 AHMM has launched a consultation on proposals to refurbish Debenhams’ former flagship store on Oxford Street and transform it into a new retail and office scheme.

The refurbished building, which takes up a whole block close to Bond Street tube station, will include three storeys of retail facing Oxford Street, a mix of uses on the building’s three other sides and office space on its upper levels.

The launch of the consultation follows Debenhams’ closure of all its remaining department stores earlier this month, ending nearly two and a half centuries of trading on the UK’s high streets.

The chain started life in 1778 as a drapery on Wigmore Street less than 100 metres from the Oxford Street store but went into liquidation last year following years of financial difficulties and after talks on a rescue deal failed.

The flagship Oxford Street store, which also housed the firm’s head office on its upper levels, was one of the stores which did not reopen for closing down sales following the easing of lockdown restrictions in April.

AHMM founding partner Paul Monaghan said the practice was “thrilled” to be able to “rethink this key building”. He said the plans will re-establish “334 Oxford Street within the context of a changing city centre environment that will demand greater flexibility for future uses”.

The project is being managed by the London based commercial real estate practice Capital Real Estate Partners.