Alexander: 'You must hold our feet to the fire' 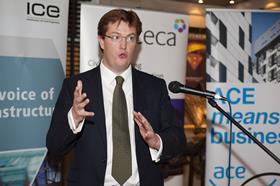 Chief Secretary to the Treasury, Danny Alexander, has launched a new industry forum to help drive implementation of the UK’s National Infrastructure Plan.

NIPSEF will be co-chaired by Alexander and will bring together the government and the construction industry’s Infrastructure Alliance.

He said: “It will bring together practitioners - people involved in the delivery of infrastructure - with myself and Treasury on a regular basis, and will make sure that we are holding our feet to the fire and are working together on the best way to deliver our commitments.”

Alexander said the first meeting of the forum would be in “the next few weeks”. “I will be taking part in that myself,” he added.

The launch of the forum came as the Infrastructure Alliance launched a new report calling for the government to back investment in infrastructure across the country.

The report warned that the UK’s economic recovery could be held back if fears of an emerging crisis in the UK’s infrastructure sector are realised. To avoid this “infrastructure crunch” the report called for::

Speaking on behalf of the Infrastructure Alliance, Costain infrastructure director Darren James said: “While infrastructure can help plot a route to recovery, equally its failure can stamp a foot on the brakes of the economy. We know that congestion steals billions from UK plc each year, and it is set to worsen. And we face an energy crisis.

“But we, as industry, the government, and everyone else can fight this crunch. We are publishing this four-point plan detailing the steps we believe we all need to take to secure the future of UK infrastructure.”