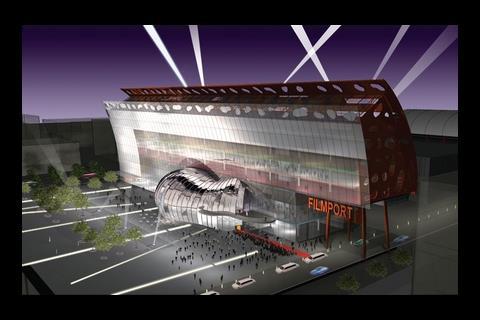 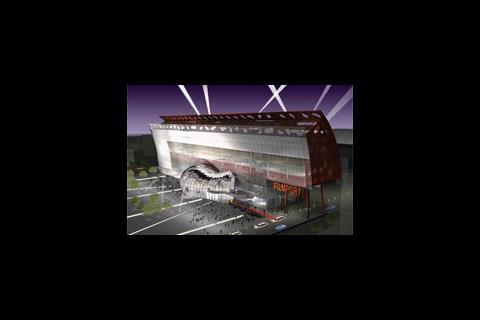 Architect Will Alsop will design the first commercial office building for a new film and media centre in Toronto. Working with local masterplan architect Quadrangle, the sleek building, with its red exterior and enveloping curved form, will be FILMPORT’s first commercial building.

Alsop’s building sits outside the gates of the Quadrangle-designed film studio complex. It will house post production companies, union and guild offices, film schools, and amenities such as restaurants and shops.

The 280,000 sq ft, 11 storey building will be clad with a curved glass curtain wall and a dramatic façade. Materials have been inspired by large ships which are part of Port Lands heritage. The roof will flood the mezzanined top floor with natural light and provide a spectacular view of downtown Toronto.

Will Alsop said: “Our inspiration for the design was to create a truly public space that would become a new destination in the city where everyone is welcome to interact with the many aspects of the film industry.”

Canada’s largest film studio operator Toronto Film Studios (TFS) won an international competition for the rights to build FILMPORT in Port Lands. The area, named a “convergence community” for creative industries by the City of Toronto, is undergoing major regeneration.

Alsop said: “The whole of FILMPORT including this building is the first significant development in the regenerated Port Lands and is an exciting an important benchmark for the area.”

Expansion plans to include new state-of-the-art film production facilities will be completed by early 2008.