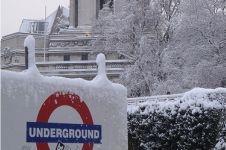 The government was under pressure last night to explain why the country's transport infrastructure buckled under heavy snow in spite of five days' warning.

The Conservatives demanded an explanation for the failure to cope with the weather, as further heavy snow was predicted to halt transport services in parts of the country.

Roads, railways and airports suffered severe disruption yesterday under the heaviest snowfall for 18 years. Thousands of schools and businesses closed, with an estimated cost to the economy of £1.2bn.

In London, 10 of the 11 tube lines stopped working properly and almost all bus routes were cancelled.

Shadow transport secretary Theresa Villiers said: “Both our national and local transport infrastructure should have better contingency plans in place for extreme weather. It is not inconceivable that these things will happen and the public deserve better.”

Councils and transport bosses came under heavy criticism for failing to prepare adequately for the long-expected storms, and some politicians have called for the UK to take advice from Canada and Scandinavia on dealing with snow.

The North of the country is expected to bear the brunt of the extreme weather conditions today, with the Pennines, the North-east of England, eastern Scotland and the Borders bracing themselves for heavy snow.

The Institution of Civil Engineers' director general Tom Foulkes said: "The high level of disruption we’ve seen caused by the recent snow fall shows us just how brittle our infrastructure networks are in the face of extreme events.

"It certainly would not be practical to invest millions of pounds to prepare for events such as we’ve seen in the past few days, that only happen every twenty years or so, but what we must do is think strategically about creating some spare capacity in the system to make our networks less vulnerable to disruption.

"The Institution of Civil Engineers’ current defending critical infrastructure inquiry is looking at a range of relevant issues, including what level of service we should expect to have maintained and also investigating the level of disruption we can live with in the short term, given the prohibitive costs of defending against all uncertainty."