Another Blackfriars tower set for OK

Central London scheme by Wilkinson Eyre will be 53 storeys high

Planners in Southwark are expected to give the green light to a 53-storey tower in an emerging cluster on London’s South Bank.

Designed by Stirling Prize-winning architect Wilkinson Eyre, the scheme at 18 Blackfriars Road has been recommended for approval at tomorrow night’s planning committee.

It will be the centrepiece of a six building scheme with the block containing 227 flats above retail. A 34-storey office block by Brisac Gonzalez with a ground-floor music venue is also planned.

There will also be 19- and 12-storey hotel buildings arranged around a public space and a 15-storey “affordable” housing block with 61 flats. All the buildings would be linked below ground by a four-storey basement.

The scheme replaces a similar one, also designed by Wilkinson Eyre but known as 20 Blackfriars Road, which was consented in 2009 after a public inquiry. This included a 42-storey tower.

The 0.8 ha site is bounded by Stamford Street and Paris Gardens. The scheme will dwarf its surviving neighbours, a listed pub and the 1960 Christ Church by R Paxton Watson.

The church, with a mission to local workers, is listed grade II principally for its stained glass which depicts local industries and buildings such as Bankside Power Station and Sea Containers House.

Once given approval, the tower will be taller than the 50-storey One Blackfriars Multiplex is building at the southern end of Blackfriars Bridge which has been designed by architect Ian Simpson’s firm SimpsonHaugh.

Across the road from that scheme McGee has started work to tear the mid-rise Ludgate House which is set to be replaced with a 49-storey tower designed by PLP.

And Kier is on site with a 13-storey scheme to build a hotel that will be operated by hip hotel group Hoxton – whose owner says its Hoxton hotels are inspired by the “‘hoods” they are part of. It will eventually include a 192-bed hotel and nearly 4,000sq m of office space and is due to be finished by the end of 2019. 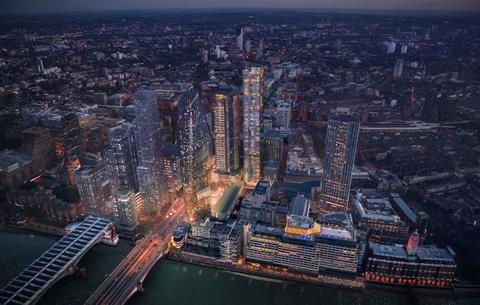