Another major Isle of Dogs scheme given the green light

CZWG-designed cluster of blocks could provide up to 2,000 homes

Tower Hamlets council has given the green light to another huge mixed-use scheme on the Isle of Dogs providing nearly 2,000 homes.

Supermarket Asda and developer Ashbourne Beech Property are promoting the scheme, designed by CZWG Architects, on the site of an existing Asda store on the northern edge of Mudchute park.

The approval follows the council giving outline permission for another major scheme on the northern side of the Isle of Dogs, called North Quay, featuring a series of towers up to 225m tall.

Detailed planning permission for the Asda redevelopment has been granted for a number of the towers, which will provide 526 homes, a new 17,000 sq m foodstore, a primary school and public realm across eight blocks rising from three podium levels. 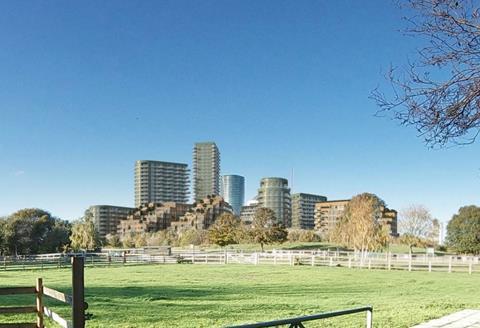 How the scheme will look from Mudchute Park

Blocks for this phase of the scheme range from three to 15 storeys, rising to around 60m in height.

In addition, outline permission for the hybrid application has been granted for a further four blocks, providing up to 1,446 more homes in towers up to 115m in height.