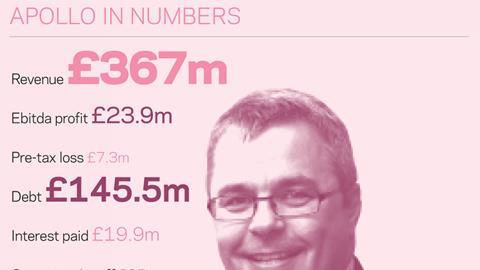 Social housing contractor Apollo increased profit before tax and interest payments by 8.6% in the year to March 2011 on the back of growing revenues, despite the recession.

The contractor, which has announced its intention to merge with rival Keepmoat before the end of the year, saw its Ebitda (earnings before interest, tax, depreciation and amortization) hit £23.9m, up from £22m, on revenues up 6.1% to £367m.

However, the firm made an overall loss before tax of £7.2m, when taking into account the interest and repayments on the £146m debt used by its private equity company parent, Cavendish Square Partners, to buy it in 2010.

This pre tax loss was marginally lower than the £7.9m loss recorded in 2010. Dave Sheridan, Apollo chief executive, said the Ebitda profit increase showed the business was on track despite a difficult market.

The firm’s order book has held steady at £800m, with its bid pipeline increasing marginally to £2.3bn. Staff levels increased by 23 to 907 as it moved more toward responsive maintenance work, which is more staff intensive.

Sheridan said: “we still remain strong in our core region of London and the south east, and we have strong order book going forward. We’re delivering on our plan. We’re being slightly more selective on what we bid for, but we’re using our skills to turn a margin.”

He said the overall loss for the year was normal for a business, such as Apollo, that has been subject to a leveraged buy-out, comparing the firm to premier league club Manchester Utd, itself subject to a £790m leveraged buy-out in 2005. “We use ebitda as our measure which is quite normal for a private equity-backed business. If you look at Manchester Utd it’s the same story. As long as the business performs, it works, and we’ve made our payments comfortably.”

The full year accounts show that cash in the business reduced by £4.7m over the year, leaving a positive balance of £32.1m.

The loss was generated largely because of its payment of £19.8m of interest to service the debt taken on to buy it out, plus a £10.9m write-off for good will. Sheridan said merger talks with Keepmoat were progressing and the firms were on course to merge before the end of the year, providing the merger got OFT approval