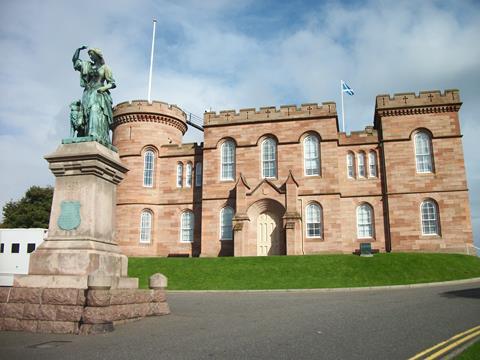 Reiach & Hall has landed the job of designing a £23m justice centre in Inverness.

The project will see the city’s courts moved from their existing home in Inverness Castle, freeing up the historic building to be transformed into a tourist attraction – a separate job for which architects have yet to be appointed.

Stirling Prize contender Reiach & Hall is at the early stage of design, ahead of a public consultation at the end of the month.

Project costs are estimated at £23m. The money was approved by Scotland’s deputy first minister, John Swinney, when he was finance minister in 2015.

Work should start this year, with the centre due to open in summer 2018.

The new building is expected to be built on a former Stagecoach depot near the city’s Burnett Road police station after the sale of a previous site nearby fell through in May.

A pre-planning application has been submitted by the Scottish Courts & Tribunals Service to ascertain Highland Council’s view on the site.

The new justice centre will contain the sheriff courts, tribunals, offices, a cafe and ancillary accommodation. It will also provide a home for agencies such as the Crown Office, social work department, Women’s Aid and Citizens Advice under the same roof.

The client described it as a “unique centre of community justice and support services for witnesses, victims, accused and those convicted in courts”.

Reiach & Hall, which is working with Arup, was appointed by Robertson Construction after competitive interviews. The design-and-build job was procured via the Scape framework.

Meanwhile tourism minister Fergus Ewing, who is co-chair of the Inverness Castle working group, said the plans for a new justice centre presented them with the opportunity to develop a world-class tourism attraction.

“Tourism is not just a key part of the local economy but a key driver of growth across Scotland and I am very keen that the castle finds a new life that benefits the Highlands and Scotland as a whole,” he said.

“As confirmed by a recent public consultation and meetings I have held with local businesses, there is strong support for such an attraction and as construction commences on the new justice centre we will be working equally hard to develop the castle’s huge potential to attract and engage visitors from all over the world.”