Architects 'busier than ever', finds RIBA 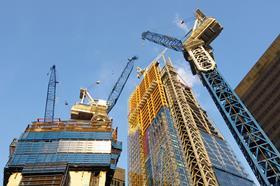 The RIBA says architects are busier than ever, with the number reporting they are personally under-employed now at its lowest since the institute began its Future Trends survey six years ago.

According to last month’s survey, the percentage of respondents reporting that they had personally been under-employed in the last month fell to just 9%, representing a new all-time low since the survey began in January 2009.

RIBA director of practice Adrian Dobson said: “The results concur with the ONS figures released last week showing architects’ unemployment at the lowest levels since mid-2008 – evidence of a real improvement in the economic outlook for the profession.”

This has in turn led to skills shortages in certain areas, Dobson added. “The challenge in this recovery is that as spare capacity within the profession reduces, we are beginning to see signs of practices encountering difficulties in attracting new staff with the right mix of skills and experience, particularly in areas such as BIM.”

The overall Workload Index was unchanged in December, remaining at +29, with positive scores in all nations and regions of the UK.

Confidence about private housing fell back marginally to +25 last month, down from +26 in November, while the commercial sector workload also fell – to +17 from +20 the month before.

But both the public sector and community sector workload figures recorded a small rise.