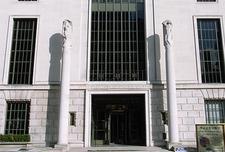 Architects’ prospects have taken a turn for the better according to the latest RIBA Future Trends survey.

The December results of the monthly member survey showed the ‘workload index’ at +8. This follows a fall in the previous month and means the workload index has remained in positive territory since last October, suggesting a stable market for architects’ services.

The commercial sector index grew strongly, up five points, as did private housing.

RIBA director of practice Adrian Dobson said: “The upward movements in two key sectors (commercial and private housing) represent a very positive trend for the profession and the wider industry. They are the sectors most likely to provide an early indication of any emerging sustainable growth in the UK construction industry.”

The survey also revealed that works to existing buildings make up 64% of RIBA members’ workload, a figure which has been increasing steadily since 2010.

In terms of regions, London, the South of England, the Midlands, East Anglia, the West and Wales continued to be relatively more optimistic about future workloads, and for the first time since October, the North of England also returned an overall positive balance figure.

Practices in Scotland and Northern Ireland “continue to be much more cautious about workload prospects”, the RIBA said.

Employment prospects have not yet seen an upturn, the survey suggested, with the staffing index decreasing marginally to -3 in December down a point from the previous month.