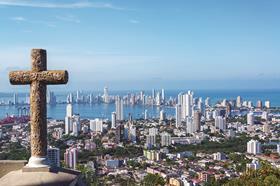 Colombia’s £55bn construction market will remain strong despite voters rejecting a peace deal to end 52 years of armed conflict in the country, according to Arup.

In a shock result, 50.2% voted against a deal agreed between the government and left-wing guerrillas the Revolutionary Armed Forces of Colombia (Farc).

Ahead of the referendum, construction firms told Building in the country’s capital Bogotá that if the deal was accepted by the public, it would result in a boost to the economy and a “peace dividend” for the construction market.

Commenting after the dramatic result was confirmed on Sunday, Federico Torres, Arup’s Colombia general manager, told Building it was “bad for the country” but said the construction market would remain “strong”.