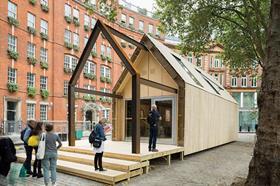 An Arup-designed building using only materials that can be taken apart and used elsewhere has opened in London.

The so-called “circular building” (pictured), which was built using the principles of the circular economy, is on display until 8 October outside the Building Centre in Store Street, central London.

In construction, meeting the objective of a circular economy involves constructing buildings in a way where there is minimal or no waste, using materials that have the potential to be re-used elsewhere.

Sustainable features of the building include a panel system made from biowaste, an acoustic system made out of plastic bottles and a 3D printed heating and ventilation system.

Designed and engineering by Arup, built by Italian facade engineer Frener & Reifer and advised by Bam, the building is made using a “cradle-to-cradle approach” – whereby all the construction materials can be sent back to the suppliers, to be re-used elsewhere, once it is dismantled.

Lewis Blackwell, executive director of the Building Centre, told Building the aim of the project is to design a building so that all its components and materials could ultimately be re-used, re-manufactured or recycled – and to raise awareness of the circular economy in the sector.

He said: “There should be an expectation or a requirement within the construction industry for documentation [of building materials], or a traceable chain of where the materials come from. There should be an accountability about what’s in a building.”

The Arup-designed project comes after the EU last year pledged £495m in 2016 and 2017 to develop the circular economy.