SNC-Lavalin to swap Euston Tower for site in Victoria 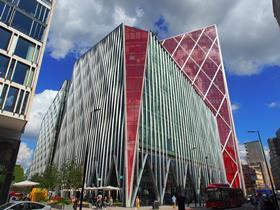 SNC-Lavalin has announced it is moving into new London offices as part of plans to grow its operation in the UK.

The Canadian consultant, which bought Atkins last summer in a £2bn deal, has signed a deal with developer Landsec to move into the Nova complex in Victoria (pictured) from its current office, the 1960s Euston Tower, in the first quarter of next year.

The new offices at Nova’s North Building will house more than 1,000 staff from SNC-Lavalin and its other businesses, including Atkins.

Last year, the Nova building won the Carbuncle Cup, organised by Building’s sister title BD, with the competition’s judges labelling the structure “crass”, “over-scaled” and a “hideous mess”. It was designed by PLP and built by Mace.