BAA to axe 200 staff from its projects division 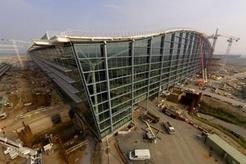 Airport operator BAA is poised to make swingeing cuts to its construction projects division as the result of a review aimed at making cost savings.

It is understood that BAA, which is owned by Spanish contractor Ferrovial, will make up to 200 redundancies in construction management and planning at the end of the month.

The move signals a shift away from the construction management method that was used by BAA on its flagship Heathrow Terminal 5 project. It comes just two months before the £4.3bn Richard Rogers-designed scheme is due to open.

It has emerged that BAA held a series of consultation meetings in the run-up to Christmas to let contractors know about its plans. It is expected that most future contracts will be let on a design-and-build basis.

A contracting source said: “This is what BAA calls its ‘simplification process’. Its aim is to allow it to step back from more straightforward processes and allow contractors to take on more responsibility.”

The source added that “a couple of hundred workers” were likely to lose their jobs. “BAA is doing this as Ferrovial is desperately trying to cut costs,” he said.

The news comes as Ferrovial moved last week to play down fears that its plan to refinance a £10bn loan associated with the £10.3bn purchase of BAA in August 2006 had been scuppered by the credit crunch.

BAA plans to spend £9.5bn developing its three London airports – Heathrow, Gatwick and Stansted – over the next 10 years.

A BAA spokesperson said: “Under BAA’s continuing business change programme we have reorganised the project delivery and development organisations.

“BAA will continue to resource internally the project management of the company’s capital programme, while also leveraging maximum value from the delivery expertise which exists in the supply chain.”