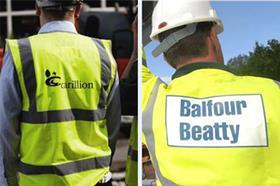 Balfour Beatty has ended merger talks with Carillion, saying the decision was made after Carillion changed its mind and insisted it wanted Balfour’s consultant arm Parsons Brinckerhoff to be included in the combined entity.

Balfour Beatty had announced its intention to sell Parsons Brinckerhoff in May. When the two firms announced they were in merger talks last week, they said, in a statement, that the sale of the £160m-turnover consultant, which is already underway, “will proceed unaffected” by the possible merger.

But in a statement to the City this morning, which Balfour Beatty said was made without the consent of Carillion, Balfour said it had terminated the discussions over a merger following Carillion’s “wholly unexpected decision to only progress the possible merger in the event that Parsons Brinckerhoff remained part of the potential combined entity”.

The firm added: “This change is contrary to the basis upon which the Balfour Beatty Board agreed to engage in preliminary discussions.

“It is also contrary to the joint announcement … which confirmed that the sale of Parsons Brinckerhoff would be unaffected by the merger discussions and also a presentation to Balfour Beatty’s Board by Carillion.

“This change in the proposed terms is not acceptable to the board of Balfour Beatty.”

Balfour Beatty said it would now “proceed in accordance with its own business plan, including the competitive sale process of Parsons Brinckerhoff currently well underway”.

The firm said it would also continue its search for a new group chief executive, following the exit of Andrew McNaughton in May.

Following Balfour Beatty’s statement, Carillion issued its own statement, hitting out at Balfour for its “unilateral” move to end the merger talks, and stating it still believed there was a powerful case for a merger between the two firms.