Judges impressed with sustainable design of One Angel Square 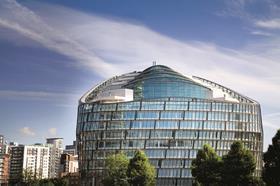 Bam Construct’s £100m headquarters for the Co-Op in Manchester has been named RICS’ project of the year.

The project came out on top of 600 entries for the RICS Awards.

One Angel Square is the largest commercial office building in Manchester and achieved a BREEAM outstanding rating.

The judges said that sustainability had been at the heart of every aspect of the project.

The project fended off competition from the Florence Institute in Liverpool; Hengrove Park Leisure Centre in Bristol and the Clyde Gateway regeneration project to take the award.

Michael Newey, RICS president, said it was a “compelling entry” to the awards and its quality “spoke for itself” despite a high standard of entries.

He added: “As the first BREEAM ‘outstanding’ regional office building in the UK, it goes to show that sustainability, cutting-edge design and architectural appeal can go hand-in-hand.”