Barratt completions jump 9% in first half

Shares in Barratt rose 3% in early trading after the UK’s biggest housebuilder reported the completion of 9,077 homes in the six months to December, more than 9% above the figure last year.

Barratt said in a trading update that sales per site per week in the six months since the start of its new financial year in July had been up 12% on the year before, at 0.77, and claimed its delivery figures were above expectations. 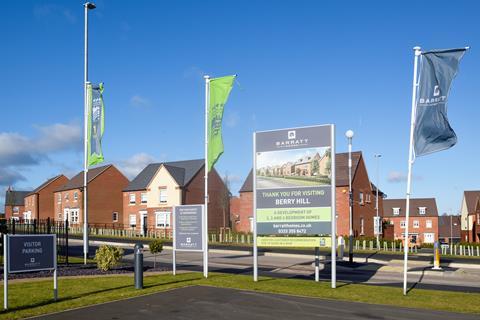 However, the firm said that the sheer level of demand experienced since lockdown meant it expected it will now have a reduced level of homes available to sell in the third quarter of its financial year, from April to June.

Hence, despite completing more than 9,000 homes in the last six months, the firm said it expected to complete only another 6,250-6,750 more in the second half of the year.

It said it already had a 90% sold figure for the year, and the drop in the second half reflected “the reduced level of work in progress carried forward at December 2020 compared to June 2020 and, as a result, a greater reliance on construction activity in the half year ahead.”

Its expected delivery of around 15,500 home completions for the full financial year would put it around 23% above the number built in the covid-affected 2020 results, but still 13% below the pre-pandemic level reported in its 2019 results.

The firm said it remained focused on rebuilding completion volumes to its target of 20,000 homes a year, while delivering a minimum of 25% annual return on capital employed.

The firm also said it was now expecting to reinstate its dividend alongside the publication of half-year results in February.

Chief executive David Thomas said: “Despite the ongoing challenges presented by the pandemic, we are confident that our operating performance and strong financial position provide us with the resilience and flexibility to respond to the operating environment in FY21 and beyond.”