Beginning to bounce back 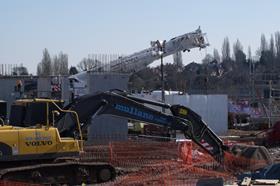 Vinci Construction climbed into third with £120m of awards, while Balfour Beatty re-entered the top 10 in fourth with £103m worth of wins.

The news came as the CPA/Barbour ABI construction index rebounded slightly in April after two consecutive months of decline.

The index, compiled by the Construction Products Association using data from construction information firm Barbour ABI, registered 119 in April, up 2% on the previous month. The index measures contract awards and uses a January 2010 base of 100.

The index continued to outperform 2011, with the headline figure up 23% on April last year, helped by strong growth in orders in the offices and private housing sectors.

Senior CPA economist Kelly Forrest said the strong performance of the index since the start of the year reflected “strengthening” private sector sentiment, although she admitted there could be a “lag” before the wins translated into increased activity.

She said: “It’s encouraging and there’s an appetite [for development] out there, but there’s a lot of uncertainty. Developers may want to wait and see for a few months rather than pushing the button and starting work.”