Beneath the black hill 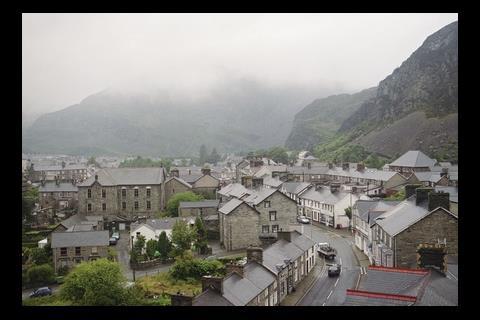 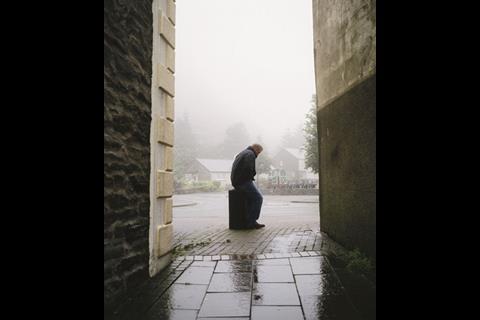 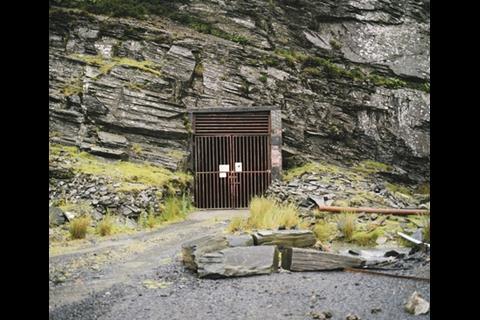 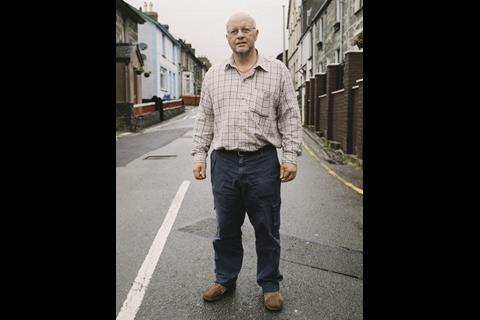 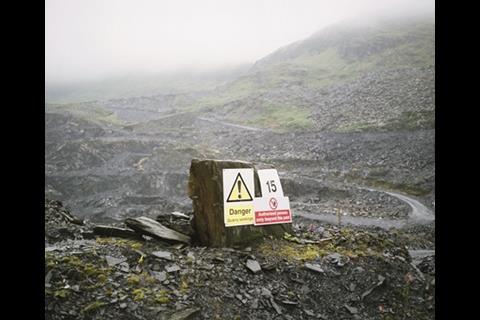 Blaenau Ffestiniog is not only hewn out of slate, its people depend on it for their livelihoods. So when Alfred McAlpine noticed that millions of pounds were unaccounted for and closed a quarry, it shook the town to its core. Dan Stewart went to Blaenau to find out what happened next. Photographs by Michael Grieve

Blaenau Ffestiniog is a town built on slate. Settlers arrived when the first of its three hilltop quarries opened in the mid-1700s, and the North Wales town has since schooled, housed and buried generations of quarrymen. And the sleek, blueish stone they split and cut has adorned buildings across the country, from Buckingham Palace to the Wales Millennium Centre.

It’s not just the town’s economy that is founded on slate; it is also built out of the stuff. From the roofs of the houses to the face of the church and the floors of the pubs, you can’t get away from it. Blaenau is slate.

But it may not be for much longer. At 7am on 26 February 2007, Alfred McAlpine announced that it had uncovered serious financial irregularities at its Welsh Slate division, which ran the three quarries. It was not clear exactly what had happened; McAlpine said only that managers had since 2003 “misrepresented” sales and production figures.

Building can reveal that what Alfred McAlpine believed it had discovered was that its slate products had been underpriced, leading to a shortfall in its revenue. It concluded that this was concealed by means of false invoices, which inflated the number of sales it had apparently made and created a financial deficit in the accounts. However, to maintain cash flow, managers are alleged to have discounted prices if customers bought their slate earlier than they were needed. Although this brought in enough money to keep the business going, it meant the selling price was far below the value of the slate. Together with the earlier underpricing, it is understood that the products were being sold for as little as half the cost to make them.

It is not thought that anybody gained personally from the underpricing, and Alfred McAlpine did not call for a police investigation. The police started one anyway, though, and it is not likely to finish anytime soon: the complexity of the case is such that detectives expect to take months or years to reach a conclusion.

What was not in dispute was that a seemingly healthy business had suddenly become a sick one. The slate division’s pre-tax profit took an immediate £13m hit, and the cost to Alfred McAlpine’s eventual balance sheet is now expected to reach about £40m. The company reaction was to shut the Cwt y Bugail quarry, the smallest of the town’s three sites. This meant that in a close-knit community of 5,000 people, 128 were made redundant. Most of the management team either left or were sacked.

The cloud over Blaenau

Mid-afternoon in Blaenau Ffestiniog is grey and washed-out. A bank of cloud has settled over the town and drizzle coats the windows of the Queens Hotel. It is here we have agreed to meet Joe, Steve and David. All three lost their jobs in the closures.

Joe and Steve insist on anonymity – those are not their real names. In a town where everybody knows everyone else, it is best not to stick your neck out. “You put our names in your magazine,” says Steve, “and we’ll be blacklisted by every firm in a 50-mile radius.” David is not so concerned; since leaving the quarry he has moved to a different trade.

I passed one of the management team the other day and just looked away. I know people who would have punched him in the face if they saw him

They remember the months leading up to the announcement as a strange, difficult time. Employees were being made to work long shifts, but production was low. Expensive machinery was hired, broke down and never fixed. David says they were producing about 40,000 units of slate roof tiles a month, but that the target was many times higher.

The main product in Cwt y Bugail, though, was not roof slate, but architectural products for cladding and walling. It was this division, one of three within Alfred McAlpine’s Welsh Slate business, that was closed down. The other quarries focused more on roof slate and crushed aggregates.

The trio insist that the output of all products could have been higher. Steve says he was told to throw broken units over the side of the quarry. “They must have thrown away millions of pounds,” he says. “That’s what happens when you let people who know nothing about quarrying run a business.”

Experienced members of staff, with knowledge of traditional quarrying methods, would make suggestions to the managers, but the advice fell on deaf ears, says Joe. “Everyone told them but from day one they didn’t listen.”

In spite of all this, the management remained positive, and booming sales figures backed them up. Nobody quite understood it, says Joe. “They’d say ‘well done lads, another great month’ and we just thought, what?

How can that be? The machine is broken, we’re not producing anything like enough slate …” “Basically, we knew something was up,” says David.

After Alfred McAlpine declared the irregularities to the London stock exchange, directors from London went to each of the firm’s quarries to announce what they had uncovered. Chris Law, the managing director of the slate business, was sacked and replaced on an interim basis by Alan Smith, a former Aggregate Industries director. The workers were told to continue as usual. A little more than a week later, Smith returned to tell them what was about to happen: part-timers were given a week’s notice and 128 full-time employees were made redundant, either compulsorily or voluntarily. Fifty-five of those redundancies were to be at Cwt y Bugail, which was to be shut down.

“When Alan Smith said that, we were gobsmacked – there was silence,” remembers Joe. Workers were told there would be a 30-day consultation period during which they would be interviewed about their working practices and training. When the call came, it was matter of fact. Workers were brought in one by one and told they were being retained, moved to a different quarry or let go.

Joe had worked at the quarry for 16 years. “I wasn’t upset at being booted out – I was angry,” he says. “I didn’t even like working there that much, but it seemed so unfair that they could just do that. It was supposed to be a job for life. They promised us that our grandchildren would be working there.”

Go back a couple of generations in any one family and you’ll find someone who worked here. It’s in the blood

Even though two of the quarries were still open, the redundancies hit the town hard. Catherine Roberts, a counsellor at the town’s Information Shop for Young People, says an atmosphere of paranoia descended. “We’d have kids coming in, wondering what was going to happen to their parents,” she says. “A few people lost their homes. They defaulted on their mortgages as a result of this.”

In a deprived area with few opportunities, the slate industry offered a future for many of the town’s families. “Young people find it difficult to find jobs in the area beyond working in the tea shop or in Tesco,” says Roberts, “so closing anything that provides employment is going to have an impact.”

Just down the road from the Queens Hotel are the offices of the Ffestiniog Regeneration Group. As Blaenau Ffestiniog is a deprived area, this organisation plays a vital role in winning grants and financial support, such as EU Objective One funding. We meet Bryn Williams, the body’s chairman, and Richard Thomas, its vice-chairman, in the group’s sparse new offices. They have just moved in, and the smell of paint fills the air.

Williams says there has been a lot of negative feeling in the town since the closure. “Slate quarrying makes a difference to the nature of the town,” he says. “You hear people saying that when quarrying is over, the town will be dead.”

He says the town’s self-esteem has been damaged. Everyone is aware of the history and traditions of the quarries, because they are tied in with the origins of the town. “Go back a couple of generations in any one family and you’ll find someone who worked there,” says Thomas. “It’s in the blood.”

Thomas says that financially, the biggest impact on the area would be if the companies that have gathered around the slate industry were to go elsewhere.

“A lot of small businesses, roofers, tile distributors have been created around here,” he says. “They rely on the quarrying, so if that is in doubt they’ll look elsewhere. It’s not just those who work in the quarry who are affected.”

Thomas, a former quarryman, is reticent when asked who is to blame for what happened. He says it is important to give credit to Alfred McAlpine. “Whatever else they did, they made the quarry into a workable project,” he says. Initiatives such as setting up a slate showroom in London and petitioning for the use of their materials on the Millennium Centre have given Welsh slate a national profile.

“They put slate back in the imagination of architects and designers. They expanded it into the 21st century,” says Thomas.

They’d say ‘Well done lads, another great month’,” he says. “We just thought, what? How can that be? The machine is broken, we’re not producing anything like enough slate

But back in the hotel bar, Joe and David don’t see it that way. Joe is claiming unfair dismissal for having insufficient consultation time – he claims they were owed 90 days, not 30. Both firmly believe the management ran the place into the ground.

“I passed one of the management team the other day and just looked away,” says David. “I know people who would have punched him in the face if they saw him. They shouldn’t show their faces around here much.”

Steve, however, is more sanguine about the disgraced team. “I’ve nothing against them. They did what they did to keep us in work. I say fair play to them.”

Richard Thomas says many townspeople are hoping Alfred McAlpine will swallow its financial losses and rebuild its presence in the area. “The order books are full,” he says. “The demand is there.”

He might not need to fear collapse. Although selling the entire slate division remains an option, Alfred McAlpine is most likely to sub-lease Cwt y Bugail to a third party. McAlpine’s interim manager, Smith, who would not otherwise comment on this article, said the company would have to get permission from the Crown, which owns the freehold, to sub-lease the quarry.

He says: “There is a proposal at the end of August that a third party will take over and run the quarry.”

Asked if the workers would get their jobs back, he says: “The individual implies that.”

It is not clear who this individual is, although it is not a local farmer, as has been rumoured in the community. Building understands that the potential buyer owns a local stone and architectural products firm.

Good news, but until then the quarry will remain a sorry sight. Near the end of the winding route out of Blaenau, where Cwt y Bugail bursts out of the mountainside, heavy plant equipment and tractors sit motionless next to heaps of cracked slate, quietly getting on with the business of rusting.

Read about the history of this story at www.building.co.uk/archive