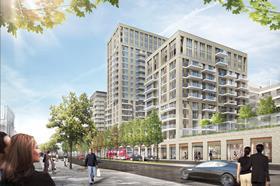 Berkeley is building more new homes now than it was immediately before the financial crisis hit in 2008, the housebuilder has said.

The firm made the statement as it posted strong half-year financial results for the six month period to 31 October, with revenue and pre-tax profit up nearly 20%.

The firm invested £278m invested in land over the period to acquire an additional 1,754 residential plots.

Chairman Tony Pidgley said the firm’s performance indicated it was on track to make a promised dividend payment of £568m in September 2015 and return £1.7bn in cash to shareholders by no later than September 2021.

Pidgley said the firm had the “capacity to invest further” in housebuilding, but he was concerned about current political uncertainty “around property taxation and international buyers”.

He added: “The long-term challenge for the country is to deal with the significant housing shortfall which continues to grow.

“Over the last five years Berkeley has doubled the size of its business, investing over £1.5 billion into land and over £2.5 billion into build, sustaining 16,000 direct and indirect jobs each year and building over 15,000 homes of every tenure in vibrant new places.”