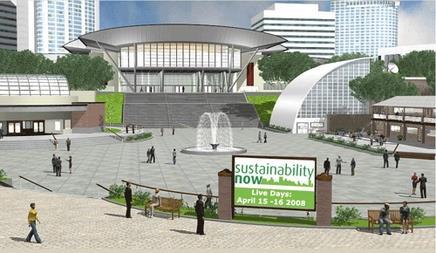 Here's our first instalment of excerpts from the lounge area during last week's virtual event. We start with a discussion on energy performance certificates - what are they, can they make a difference, how are they related to display energy certificates?

There's still plenty of debate and discussion to be had on sustainability if a visit to last week's Sustainability Now show was anything to go by. Visitors to the event flocked to the lounge area, which housed a wide ranging online chat which ranged from swapping jokes to advice, techical information and heated debates on politics and policy. In the first of our excerpts we pick up on a thread related to energy performance certificates:

Eleanor Short: can any of you answer any questions on EPCs?, just looking through the info on this website, there is a link saying that some leniency will be given to buildings without an EPC, we have an offic block nearing completion (end of JUly) is there somewhere that categorically says we are safe from prosecution for a few months?

WENDY HINETT: thanks ben, are those compulsory nowadays?

ben holloway: I believe so

ben holloway: if memory serves me correctly since May 1st

Corinna Palin: Wendy/Tim, how is the date progressing??

WENDY HINETT: So, if you design offices to BREEAM standards, are you still required to have an EPC?

ben holloway: I dont know much about bream offices. EPC's are for your HIP

Eleanor Short: EPC's are required for dwellings and non dwellings, i don't know if they are included in BREEAM, but they are a separate certificate.

WENDY HINETT: thanks Eleanor, this is all new to me! So much paperwork?

Eleanor Short: It never stops! so much for paperless offices!!

Stuart Foster: Some of the Energy credits under BREEAM 2008 are updated to use the information provided by an EPC.

WENDY HINETT: Oh so they are just part of the HIPs !!!

WENDY HINETT: what are DEC's?

Jonathon Moreels: My desk is collapsing with all the new legislation and guidlines!

WENDY HINETT: Are DECs the same as EPCs but for public buildings then?

Mark Elton: DECs measure the operational rating of the building and its occupants, not just the asset rating

stuart humpage: DEC's show how the building is actually used ie heated etc and have to be displayed for the public to see

WENDY HINETT: why would the public be interested in seeing that?

Mark Elton: To see that our government practices what it preaches

stuart humpage: they probably arent!! given that most buyers aren’t interested in seeing the EPC's !

Is there not some real danger of confusion between EPC's and DEC's (for non-dom) as they look similar, but measure different things

WENDY HINETT: that can never be proven! that is true Mark, it's all just more bits of paper.... another tree!

janet Sanders: So, who is providing the best and most reasonably priced DEC / EPC training and accreditation at the moment.

Mark Elton: Actually, if we don't begin to understand how badly our buildings are performing then we will never learn how to get better. i think they are a good step forward

Tara Hughes: why might the public be interested in seeing the DEC's? to apply pressure on the public authorities and institutions responsible for the schools, libraries and town halls, courts, hospitals, etc...to improve their environmental performance

Tara Hughes: I'm a commercial energy assessor and know primary care trusts and local authorities that are getting twitchy about DEC's and how bad they might look… or good of course! Everyone wants to be 'a'-rated...reality might be different ;-)

WENDY HINETT: Realisticially though can every building me improved, that would cost an awful lot.

Mark Elton: Wendy, the Stern report indicated it would cost less than doing nothing and its cheaper than building nuclear power stations. Our current crop are going to cost 73billion just to decommission!

stuart humpage: Tara who did you train with?

Tara Hughes: I trained with CIBSE, do thermal modelling with simulation software for the EPC's and CIBSE training for the DEC's

stuart humpage: Tara would you recommend them and how much did it cost?

Tara Hughes: I would recommend them. It's not cheap and you do have to be from an engineering or building services background. It's not like the Domestic Energy Assessors training schemes that popped up everywhere - and a lot of unhappy ex-driving instructors and estate agents resulting from it

Eleanor Short: Tara do you know if we will have any lee way with building control to get sign off if we have not got an EPC by completion at end of July?

Tara Hughes: Eleanor you will have to negotiate with building control, but if you can show that you have commisioned an energy assessor to produce and EPC(or tried) but there are delays because of demand and not enough assessors I would hope they would be lenient/reasonable

stuart humpage: Tara, lol. most of the DEA training is a joke!

Tara Hughes: I've been at clg events where DEA's have almost been in tears because they're so upset at the money they've lost doing the training and the very low price of HIP's now. I think there is going to be a conversion course but they won't be fast-tracked onto the commercial side and you do need to have a wide knowledge of the world of non-domestic buildings to start off with

Mark Elton: Re rented sector EPCs, I think the landlord or agent is supposed to present it at the viewing

Tara Hughes: EPC's - landlord has to have it before property is put up for lease/sale

Jason Hawkes: Tara- is that for commercial and residential?

Tara Hughes: the EPC is supposed to inform the prospective buyer or tenant as to the energy rating of the building so they can make an informed choice and push up the demand for 'a' rated properties - like fridges. I only work on non-domestic EPC's but I do believe that domestic EPC has to be obtained before property goes on sale too

Dave Hampton: Hi Tara. I wonder if it'll be a bit like plastic bags. For years it was 'odd' and rather sad almost to ask the shop assistant NOT to give you a plastic bag. Then suddenly its odd to ask for one. It won't take many people to actually ask to see the EPC - and seek out A abd B rated homes - to make a massive difference. And owners of F-G rated rental homes - watch out - disionvest now - quick - while u can...

Dave Hampton: Yeah Mark, in many cases that's true, but of its intrinsically always gonna be bad, whatever you do, the dis-invest might be good option

Jules Saunderson: Is there not some real danger of confusion between EPC's and DEC's (for non-dom) as they look similar, but measure different things

Tara Hughes: jules - yes confusion reigns, especially when some buildings will require both

Jules Saunderson: right, but the problem with EPC's and DEC's is that they attempt to, on the face of it, measure the same thing, energy/carbon

if we don't begin to understand how badly our buildings are performing then we will never learn how to get better. I think they (EPCs) are a good step forward

Dave Hampton: With cars it was a case of selling the SUV hummer last year.

Jules Saunderson: one is 'predicted' the other 'actual' but even if you did build it EXACTLY as designed, the two would not match up. How long till people start getting sued for not delivering?

Dave Hampton: With homes we have a fraction longer, and the positive side of the cookie is that A B and C rated homes are attracting a market premium at long last.. thats great news

Mark Elton: But only the DEC is on permanent display

Dave Hampton: Bill Bordass uses the excellent quote" In theory, practice and theory are the same thing. In practice, they're not!"

Jules Saunderson: I'm more thinking, new building, got it's EPC, then they get someone in to do a DEC and say "hang on, this isn't anything LIKE what our EPC predicted! You didn't deliver!"

Jules Saunderson: I don't think that there are enough high-rated homes around yet to say that they are attracting a premium

Dave Hampton: Jules i think that time is coming fast and i think all 'good' practitioners welcome it - both of them that is... ;-)

Jules Saunderson: and in order to be worth anything, then DEC's will need to be rolled out across the board soon

Mark Elton: Case studies in the US have shown that rental rates for green offices are up by 30% and attendances are also 2% higher

Dave Hampton: Now we are cooking with biogas

Jules Saunderson: that's in the US, where they have a very different system that is not yet forcing people down very odd, very expensive routes. Unfortunately we're insisting that people install that biogas in certain way, and only allowing them to count it in certain ways but we are allowing them to dump all of the heat and call it 'CHP'

Mark Elton: 'Green' is determined by a LEED rating so not that different

Jason Hawkes: This is a good point, Jules. Even when a building is constructed solely to measure performance, and details are given disproportionate time, they rarely perform as designed (BRE Office of the future is a good example)

Jules Saunderson: it gives you credits for 'innovation' without having to prove that it actually worked

Jules Saunderson: right Jason, partly because the benchmarks used to predict are out of date

Dave Hampton: BTW i think we can make this too complicated when we try and look at whole industry whole planet (and i know some of you have to) just look at one home - just look at your own home, what would you spend to nudge it up the fridge label scale a notch or two. What would you pay in extra rent if a home cost Â£25 a month less in utility bills.

Jules Saunderson: trying to prove that to Joe Bloggs is not so easy, particularly as people are reporting difficulties selling houses without radiators

Jules Saunderson: of course, most sensible people will, but one of the Directors here at Fulcrum built low-impact development and experienced a lot of hesitation from buyers just scared of 'different'

Mark Elton: The benchmark office building for BREEAM Outstanding did it without renewables I believe

Jules Saunderson: right, but BREAM has not yet achieved the market standing that LEED has

Jules Saunderson: and at some point we need to bring it into line with the CSH so that mixed-use developments can achieve their full potential. I haven't seen anything concrete that proves that yet, and again, think there are insufficient examples to say for sure/ I know I'm coming off as a nay-sayer here, but I think we need to be honest about the problems in order to find the solutions and not kid ourselves so that we don't get any nasty surprises later...