Between a Rok and a hard place

Rok informed the stock market that after suspending finance director Ashley Martin in August, following the discovery of financial irregularities in its plumbing arm, it had exonerated him and revoked his suspension. Unsurprisingly, the wronged man promptly resigned.

Rok’s first choice replacement was David Miller, Amey’s former financial director. This move had to be reversed after an analysts’ revolt over his credentials. The second choice was then Sean Cummins, the top numbers man at Scott Wilson.

So far, so farcical. The question is whether Garvis Snook, the chief executive, who is described by some of his peers as “Teflon Garvis”, can talk his way out of this one. It won’t be easy, given the firm’s profit warnings over the past 12 months.

Martin himself was reportedly “absolutely furious” about being made what he felt was a scapegoat and recently described his past eight weeks as “hell”.

There is no evidence of any deeper financial malaise at the contractor, but an unpredictable string of bad news bulletins will do little for investors’ jitters.

The share price has been up from 15p to between 18p and 19p since the news, which suggests that some in the Square Mile are prepared to give the company the benefit of the doubt.

But Snook must be media-savvy enough to know he won’t have many more chances. At the very least he can kiss goodbye to any more Sunday Times interviews with him pictured in biker’s leathers astride a Harley-Davidson.

He has always been evangelical about the Rok model of grouping local builders under one branded umbrella. One analyst likened him to TV preacher Billy Graham, a comparison at which he would no doubt chuckle, before setting out a perfectly plausible case as to why the non-believers were wrong. 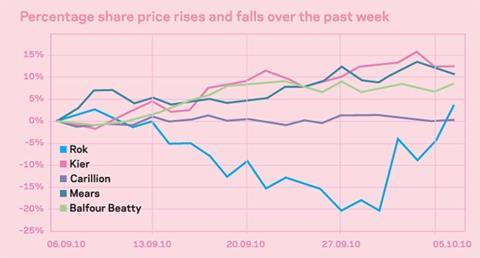