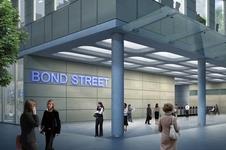 Three consortiums have been invited to tender for the £300m job to redevelop Bond Street tube station in preparation for the construction of Crossrail, Transport for London (TfL) said today.

The three bidders are:

The contract will be to expand the station and provide a step-free link to the planned Crossrail station to be built alongside. It will include a new ticket hall on Marylebone Lane, new escalators and a new, low-level link between the Central and Jubilee lines.

TfL said that Morgan Est, which had been expected to bid, withdrew from the project in December.

Bidders will be expected to return tenders by this April, with a contract due to be awarded by the summer. TfL said construction should begin at the end of the year, with completion expected by the start of 2017.

Crossrail has yet to let the contract for construction of its adjacent station.