Heritage groups have called for the height of a proposed Bjarke Ingels Group-designed office block on Fleet Street in the City of London to be lowered because of its impact on nearby buildings.

The art deco-inspired proposals would see the existing River Court Building, the former home of Goldman Sachs, which has moved to a Multiplex-built HQ around the corner, flattened and replaced by a 21-storey block featuring a series of stepped roof terraces.

The new scheme would rise above Owen Williams and Ellis E Clarke’s 1932 Daily Express Building and surround it on two sides.

The grade II*-listed landmark, the former headquarters of the Daily Express newspaper, is considered one of London’s finest art deco buildings.

The proposals by BIG, which is also working on the Google headquarters scheme at King’s Cross as well as part of the Battersea Power Station redevelopment, would include a refurbishment of the Daily Express building, including the creation of a new exhibition space and a free-to-access roof garden.

But Historic England, the Twentieth Century Society and the City of London Conservation Area Advisory Committee have all lodged objections on the scale of the building in a consultation on the scheme’s planning application. 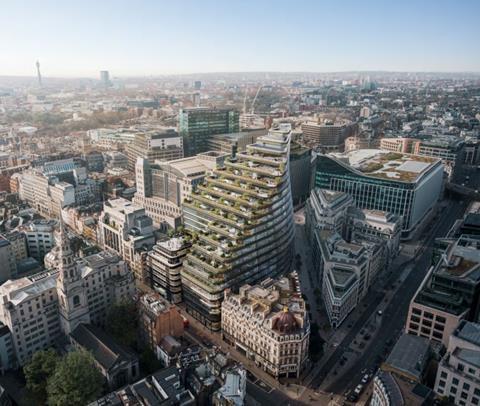 The Twentieth Century Society said that while it had no objection to the redevelopment of the River Court building, it called for BIG’s planning application to be rejected.

The group said the scheme is “too overbearing” and will harm the setting of the Express building.

It added that the art deco style of the new block would also “lessen the impact” of its neighbour, which it said “stands out in terms of both style and materials as a striking streamlined curtain-walled building within an otherwise quite architecturally conservative area.”

Historic England made a similar objection, welcoming the proposed refurb of the Express Building but arguing that the height of the new block could “progressively and fundamentally erode the character” of the conservation area.

The advisory body said the height of the building should be lowered, saying that, at its proposed scale, it would “dominate” the skyline when viewed from areas west of the City, including the Strand and Temple.

And the City of London Conservation Area Advisory Committee said that the block would be “excessively large and out of proportion”, adding that it “denigrated the importance” of the Express building.

BIG technical director Andy Young has previously said the proposals had been “driven by the local context in terms of the physical scale and character of surrounding buildings in the City of London; but also by the social context of the future workplace with a focus on wellbeing, health, and sustainability”.