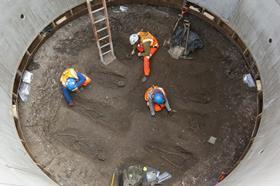 Archaeologists working on London’s Crossrail have discovered bodies within a long-lost burial ground believed to date from the time of the Black Death.

Thirteen skeletons were uncovered lying in two “carefully laid out” rows on the edge of Charterhouse Square at Farringdon, and are believed to be up to 660 years old.

Historical records reference a burial ground in the Farringdon area that opened during the Black Death plague in 1348.

Limited historical records suggest up to 50,000 people may have been buried in less than three years in the hastily established cemetery, with the burial ground used up until the 1500s.

Crossrail’s lead archaeologist Jay Carver said: “This is a highly significant discovery and at the moment we are left with many questions that we hope to answer. We will be undertaking scientific tests on the skeletons over the coming months to establish their cause of death, whether they were Plague victims from the 14th Century or later London residents, how old they were and perhaps evidence of who they were. “However, at this early stage, the depth of burials, the pottery found with the skeletons and the way the skeletons have been set out, all point towards this being part of the  14th Century emergency burial ground.”

Crossrail has said there is no “modern-day health risk” associated with uncovering the bodies because plague cannot survive for long in the soil.

The skeletons are now being excavated and taken to the Museum of London Archaeology for laboratory testing.

Scientists are hoping to map the DNA signature of the Plague bacteria and possibly contribute to the discussion regarding what caused the Black Death. The bones may also be radio carbon dated to try and establish the burial dates.

These are not the first skeletons found on the Crossrail project, with archaeologists already uncovering more than 300 burials at the New Cemetery near the site of the Bedlam Hospital at Liverpool Street from the 1500s to 1700s.