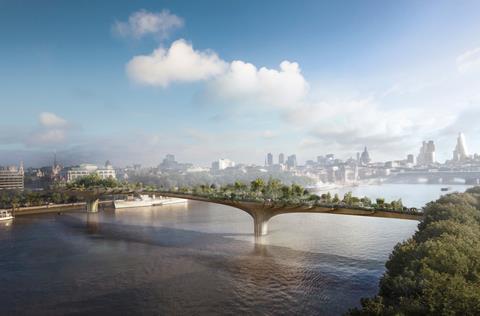 The Mayor of London Boris Johnson has granted approval for the construction of the Thomas Heatherwick-designed garden bridge in central London.

City Hall said the pedestrian bridge - which will link London’s Temple legal district to the South Bank - will “support economic growth and planned regeneration on both sides of the river”.

A preferred bidder will be appointed in spring 2015, with construction work due to begin next autumn.

It is estimated that the bridge will attract seven million trips per year.

The green light from City Hall follows approval from the London boroughs of Westminster and Lambeth, which sit either side of the bridge.

The garden bridge has faced some opposition, with campaigners earlier this month pledging to lobby communities secretary Eric Pickles to call in the project, and to take the scheme to judicial review if he refuses.

Johnson said: “The Garden Bridge will provide a fantastic new landmark for London whilst supporting regeneration and economic growth on both sides of the Thames.

“It will create a stunning oasis of tranquillity in the heart of our city and boost our plans to encourage walking in the city.”