Resi schemes drawn up by AHMM and Alison Brooks

Plans by AHMM for a 36-storey student accommodation tower in Stratford have been given the green light by the London Legacy Development Corporation (LLDC).

The scheme, which is being developed by Spiritbond and funder Schroders, will deliver new sixth-form accommodation for the London Academy of Excellence on its lower six storeys and 716 student rooms on the building’s upper levels. 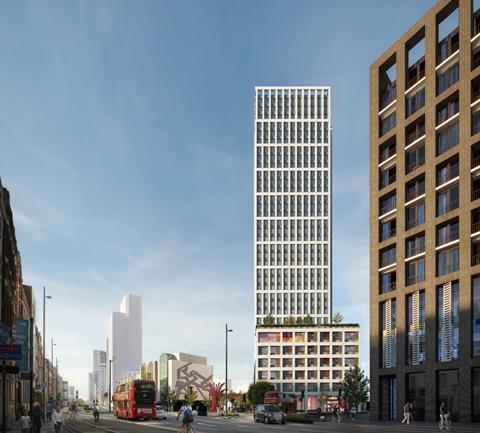 The AHMM scheme will have more than 700 rooms for students

AHMM’s proposals will replace a 12-storey office block currently occupied by HMRC at Farthingdale Walk, near Stratford station, and part of the lower-rise Broadway House development.

The scheme had already been recommended for approval by planning officers before it was given the OK earlier this week. “The design quality and associated materials of the proposed development would serve to enhance the appearance of the site and its setting,” officers said in their report.

Others working on the job include QS Arcadis, structural engineer Elliott Wood and services engineer DSA.

Meanwhile, a 35-storey residential tower on the edge of the Queen Elizabeth Olympic Park has also been approved this week by the LLDC.

It will feature 272 homes as well as a small amount of commercial space.

Architect is Alison Brooks Architects while Aecom is civil and structural engineer for the scheme at the International Quarter Development being masterminded by Lendlease.

A smaller, 14-storey block, also by Brooks, at the same site has been OK’d as well.