Brent Council is looking for a partner to deliver two residential projects in Wembley.

A design team led by Karakusevic Carson Architects has already been commissioned to draw up plans for the Ujima House and Cecil Avenue schemes.

Prospective development partners must have had a minimum turnover of £75m in any of the past three years and have until the end of May to bid for the contract, which is worth as much as £100m. 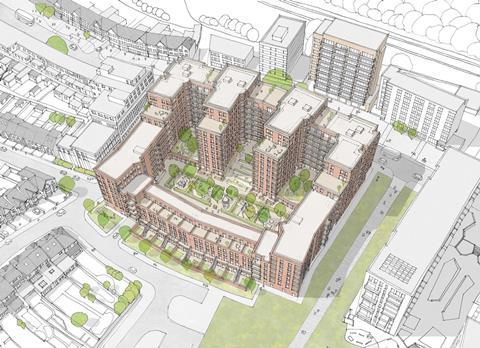 Both prospective builds are part of the Wembley Housing Zone, an area designated by the Mayor of London in 2015 to revitalise the eastern section of Wembley High Road.

Outline approval has been granted by the borough for the Ujima House redevelopment, which will comprise 54 affordable homes, a hybrid workshop unit, workspace and a café.

Cecil Avenue – which was given detailed approval last February – will be a high-density, medium-rise development comprised of 250 new homes, as well as community and flexible use space. 39% of the development will be classed as affordable.

According to the council, the project will take three years to complete and will begin in March next year.