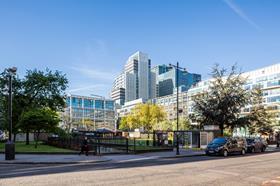 Make is blaming the UK’s decision to leave the EU for an upcoming round of redundancies at the business.

The architect behind the 20 Ropemaker Street office tower (pictured) in the City of London is understood to be axing around 10 jobs from the business which in its last set of accounts had 169 staff on its book.

It is understood at a recent quarterly address to staff at the practice’s London studio, founder Ken Shuttleworth said clients putting schemes on hold and general uncertainty about Brexit was hitting the firm.

In its last set of results, for the year ending December 2017, Make blamed a 12% fall in revenue on the result of the EU referendum back in June 2016.

The practice becomes the latest high-profile architect to announce job cuts following the Brexit results, with Richard Rogers confirming Rogers Stirk Harbour + Partners had axed around 10% of its staff in October.

At the time, Rogers told Building the firm had laid off 15 staff and added: “It’s tremendously sad. I think we’d only done this once before.”